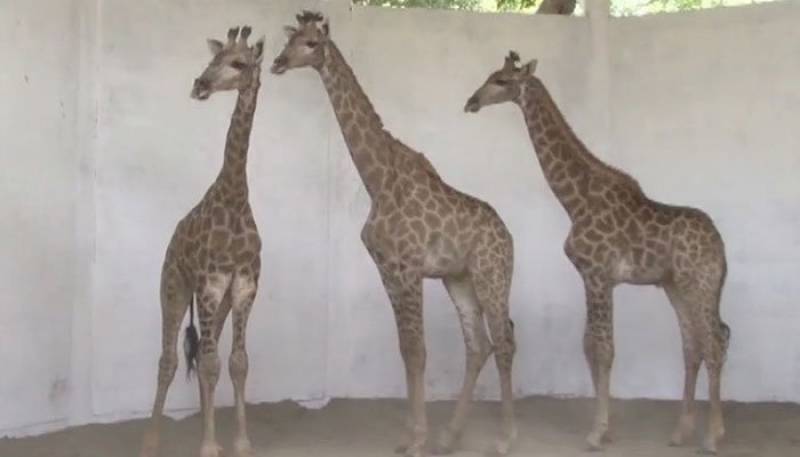 Recently, news surfaced of the death of one of the much-awaited trio of south-African giraffes in the Lahore zoo. To say that this death was a one-off incident in the zoo would be factually incorrect as eight of the several giraffes brought to different zoos of Karachi, Lahore, Peshawar, Multan, and Gujranwala have died in the past week.

The Peshawar zoo that was inaugurated as a proud venture by the provincial government in February has had a high rate of animal deaths within just a few months due to poor conditions such as inadequate temperature control and constrained space. The management at Peshawar zoo has tried to pass off these tragic deaths as animals living out the ‘natural course of their lives’. However, it is known that one of the monkeys who died was attacked in its cage by a lone wolf and a deer died after suffering a head injury from its’ cage. The zoo does not even possess a laboratory to treat the routine illness of animals.

The animals at the Karachi zoo also suffer a similar plight where a sanitation crisis leads to skin infections. The elephants in the zoo are confined to such a tight space that they hit themselves against the iron grills and have been unable to properly grow their tusks.

In 2016, the elephant Kavan of the Islamabad zoo gained attention for the 28 years of neglect and isolation he suffered, causing him to display signs of ‘mental illness’. While Kavan’s case attracted international attention leading to his relocation to a sanctuary, other animals with similar stories have not been as lucky.

If it wasn’t awful enough to see the animals lethargic, uncomfortable and cramped- visitors of the zoo made sure to add to their misery. Videos have surfaced of visitors throwing stones at animals and spitting paan on the glass cage of the snakes.

The suffering of animals in Pakistan is not limited to their anachronistic display in zoos where the animals are stripped of their natural habitats and made to pace back and forth aimlessly in front of an audience whose first instinct is to disturb whatever semblance of peace the animal may have. In Pakistan, animals are also used in the name of protest.

In 2014, protestors beat a wild boar to death with sticks after branding a political slogan across its body and tying its legs with cables. Helpless animals, especially donkeys are often used as ‘props’ in protests with no regard for the distress and pain it causes to the living, breathing animal. Most recently, a supporter of Maryam Nawaz from NA-127 has decided to "walk a lion every day in every corner of NA-127 until polling day."

Disappointing as it is, it is not surprising that Pakistan had not amended its animal rights laws till February 2018. Before this, the laws grafted on the subcontinent by the British in 1890 were in place, with fines as low as 200 rupees for ‘cruel and unwarranted killing of an animal’. While due credit should be given to the Senate Standing Committee on Interior that passed the bill titled “The Prevention of Cruelty to Animals (Amendment) Bill, 2018”, it is still to be seen if the law is implemented and enforced in a society where the average passerby has become immune to witnessing beating of donkeys and chasing of stray dogs with sticks.

Senator Khwaja who passed this amendment commented: “The passage of the bill will give a very positive message to the global community because people in other countries are very sensitive about animal rights. But unfortunately, in Pakistan, there is not much awareness about animal rights”.

The issue was summarized by the Senator but what should have been elaborated on was the cause of such ignorance. Education about animal rights needs to be part of the curriculum, and awareness about animal rights should be so widespread that its exclusion in a party’s electoral manifesto should be a deal breaker for voters.

The reaction you often face in Pakistan when you speak of animal uplift is “why focus on animals when so many humans are suffering?” This question is triggering for any believer in animal rights because a sense of responsibility towards animals does not translate into apathy for the human condition, but a more wholesome understanding of the concept of ‘rights.’ Animal rights are not special rights; they are a component of fundamental rights which comprises both the rights of humans and animals. To strengthen our conscience as a nation about animals, we must regularly interact with the concept through formal and informal education to internalize it as common sense.

The death and routine suffering of zoo animals in Pakistan, owing to institutional shortcomings and casual cruelty of spectators exposes a broader attitude towards animals, an attitude that needs to be changed in order to sensitize people to the suffering of distressed and abused animals.