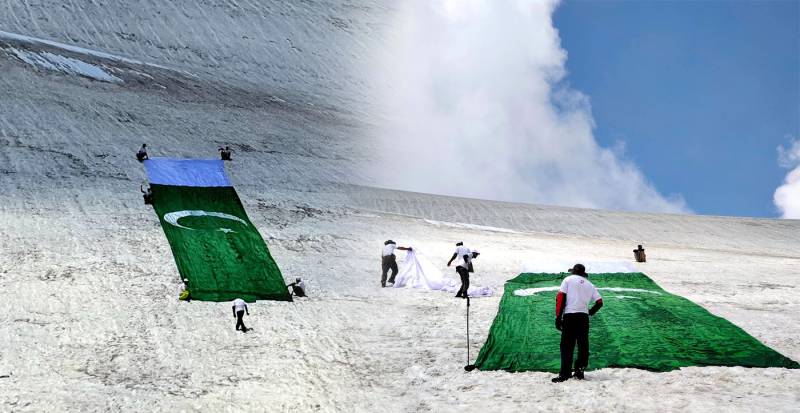 SWAT – Pakistani mountaineers have set a new record for raising the biggest flag on a hilltop at Godar Pass in the country’s northwestern region.

The mountaineers who hailed from different parts of the country raised a 200-feet-long and 20-feet-wide national flag on the summit – situated at an altitude of 14,500 feet in the picturesque Swat Valley.

The ambitious hikers completed the hectic mission by trudging up from Kedam along rocky and difficult trails.

Abbas Swati, from KP’s Madyan, Muhammad Rahim, Rehan Chenna, Amjad Khan Tajwana, Saqib Rehman, and Sarmad Ali Syed were among the team members who scaled a mountain standing at 16-000 feet near Godar pass and named their success after the martyrs of the Pakistan Army including Colonel Sher Khan Shaheed.

Earlier this year, Kuwaiti mountaineers etched their name in history books after raising the biggest Kuwaiti flag on the summit at Jebel Shams – the highest mountain in the Arab World located in northeastern Oman.