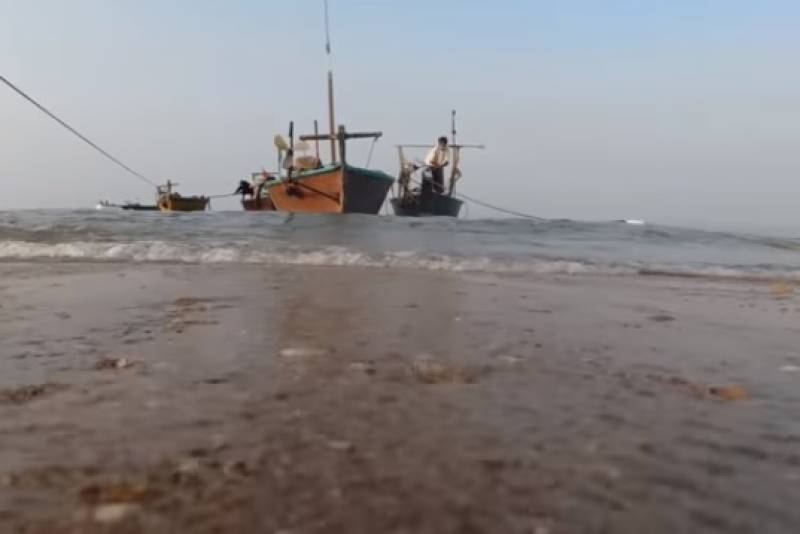 KARACHI – A fisherman has caught a strange species of deep-waters fish in dead condition near Manora, it emerged on Wednesday.

The fish, whose species is yet to be confirmed, is 30-feet-long and 8-feet wide, a local media report said.

The weird species reportedly died after got hit by a ship. Jan brought him to the fishery jetty after tying it to the boat. A crane has been called to pull the fish out of water.

Earlier this month, a group of Balochistan-based fishermen caught a rare type of Shark fish weighing over 200 kilograms off the coast of Kund Malir in Arabia Sea.

Bignose Shark, biologically known as Carcharhinus altimus, is found 800 meters off Pakistan coast in deep waters around the edges of the continental shelf.

An official of WWF Pakistan said that the big shark fish appeared in Pakistani waters for first time in several years. He said that bignose shark has been labelled as endangered species but there is no ban on its hunting in Pakistan. He said that it grow up to three meters and normally delivers 13 fries.

The WWF official said that experts from the across the world are calling for measures to save the extinct species of fish.

He said that the meat of the rare fish is consumed locally.

GWADAR - A rare type of fish known for its use in the production of several medicines was caught by the local fisherman ...