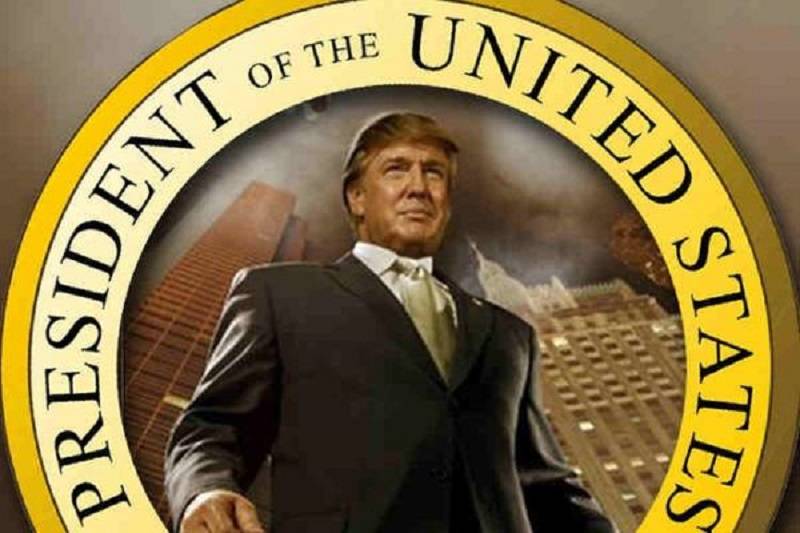 WASHINGTON, D.C. - Leaders and officials across the world reacted with shock, hope and congratulations, as Donald Trump triumphed over Hillary Clinton in the U.S. presidential elections early on Wednesday morning.

“I pledge to every citizen of our land that I will be president for all Americans,” Trump said in his victory speech on Wednesday.

“I place great importance on the China-U.S. relationship, and look forward to working with you to uphold the principles of non-conflict, non-confrontation, mutual respect and win-win cooperation,” Jinping said, according to Fortune.

Russia President Vladimir Putin offered Trump his congratulations, and “expressed confidence that the dialogue between Moscow and Washington, in keeping with each other’s views, meets the interests of both Russia and the U.S.,” Russia Today reported.

“We heard [Trump's] campaign rhetoric while still a candidate for the US presidency, which was focused on restoring the relations between Russia and the United States,” President Putin said, speaking at the presentation ceremony of foreign ambassadors' letters of credentials in Moscow.

“(Trump) spoke about resuming and restoring relations with Russia,” Putin said. “We understand the way to that will be difficult, taking into account the current state of degradation of relations between the US and Russia…. Russia is ready and wants to restore the fully fledged relations with the US.”

Good bye America: List of celebrities who will move to Canada after Donald Trump’s victory

Palestinian President Mahmoud Abbas says in a statement that he "congratulates the elected American president, Donald Trump, and hopes that peace will be achieved during his term."

An Abbas aide, Saeb Erekat, said Wednesday he doesn't expect U.S. positions on the Israeli-Palestinian conflict to change under Trump.

Erekat said the Republican and Democratic parties are both committed to a two-state solution of the conflict and "I think this will not change with the coming administration."

The Palestinians want to establish a state in the West Bank, Gaza Strip and east Jerusalem, lands Israel captured in 1967. Gaps between Abbas and Israel's hawkish leader on any border deal remain wide.

Trump has proposed moving the U.S. Embassy to Jerusalem, even though the U.S. has not recognized Israel's annexation of parts of the city.

Israeli Prime Minister Benjamin Netanyahu congratulated Trump on being elected the United States’ 45th President. “President-elect Trump is a true friend of the State of Israel,” Netanyahu said. “I look forward to working with him to advance security, stability and peace in our region.”

I congratulate Donald Trump on being elected the 45th President of the United States of America. pic.twitter.com/mD2lIn6L2k

Israeli politicians, Zionist leaders hail Donald Trump, say ‘the era of a Palestinian state is over’

German Chancellor Angela Merkel has offered Trump “close cooperation” on the basis of shared trans-Atlantic values that she says include respect for human dignity regardless of people’s origin, gender or religion.

She told reporters in Berlin on Wednesday that the campaign which ended in Trump’s victory featured “confrontations that were difficult to bear,” the Times reports. She described Germany’s partnership with the U.S. as “a foundation stone of German foreign policy.”

The U.K.’s new Prime Minister Theresa May said she looked forward to working with Trump, saying “We are, and will remain strong and close partners on trade, security and defense.”

I would like to congratulate Donald Trump on being elected the next President of the United States. Full statement: https://t.co/7W2feuodUE

President of the European Council, Donald Tusk, tweeted a letter of congratulations to Trump, inviting him for an early summit to chart E.U.-U.S. relations.

Letter to congratulate @realDonaldTrump & an invite to Europe for early summit to chart EU-US relations next 4 years https://t.co/1iRxFBTyNJ pic.twitter.com/t6LA1214eX

Meanwhile Brexiter Nigel Farage - who endorsed Trump on the campaign trail - said he was handing his “mantle” to the President-elect.

I hand over the mantle to @RealDonaldTrump! Many congratulations. You have fought a brave campaign. pic.twitter.com/txD3RFMQ2l

France will remain an ally of the United States but President François Hollande says the world is now "uncertain". Reacting to Trump's shock victory in the US election race Hollande said the result "now opens a period of uncertainty". The president congratulated Trump: "which is natural between two heads of state".

In a televised address, he also said that "this context calls for a united Europe, capable of making itself heard and of promoting policies wherever its interests or its values are challenged."

Stoltenberg said Wednesday that "it is important that the Trans-Atlantic bond remains strong" and that "U.S. leadership is as important as ever."

Trump has criticized many allies for not paying their fair share of the NATO budget.

Stoltenberg said he looks forward to welcoming Trump at next Spring's NATO summit, to be held in the alliance's sprawling new premises in Brussels.

Canada and the prospect of Americans moving there appears to have drawn so much online interest that it has knocked out the country's immigration website.

Searches for "move to Canada" and "immigrate to Canada" spiked Tuesday night as election returns favored Republican nominee Donald Trump. "Canada" was a leading U.S. trend on Twitter, with more than 1 million tweets.

While much of the chatter was clearly tongue-in-cheek, the website for Citizenship and Immigration Canada was down at the same time. Agency officials could not be immediately reached for comment.

Japan is sending a top official to Washington to try to meet with those who will be responsible for the next White House administration.

Katsuyuki Kawai, a political aide to Prime Minister Shinzo Abe in charge of diplomacy, told reporters after meeting with Abe that he had been instructed to visit Washington as early as next week.

Abe's instruction came when results showed Republican candidate Donald Trump with a clear lead. Chief Cabinet Secretary Yoshihide Suga said it was not because Japan was unprepared for Trump's win.

He said: "We have been preparing so that we can respond to any situation because our stance is that our alliance with the U.S. remains to be the cornerstone of our diplomacy whoever becomes the next president."

Heads of state from Australia, Pakistan, India and Singapore took to Twitter to convey hopes of a good working relationship with the U.S.

Australian Foreign Minister Julie Bishop says at this stage, it would appear that Donald Trump is most likely to claim the presidency.

Bishop told reporters in Canberra, Australia's capital, that her government is ready to work with whomever the American people, "in their wisdom," choose to be their president.

The Aus Gvt congratulates President Elect Trump. With our shared, enduring national interests, our relationship will continue to be strong. pic.twitter.com/xzeIXVdKIJ

She says a U.S. presidential election is always a momentous occasion, and in this instance, "it has been a particularly bruising, divisive and hard-fought campaign."

We appreciate the friendship you have articulated towards India during your campaign, @realDonaldTrump.

Modi tweeted that "we appreciate the friendship you have articulated toward India during your campaign.

He added that "we look forward to working with you closely to take India-US bilateral ties to a new height."

Trump had reached out to Indian-American voters at a rally in New Jersey in mid-October, praising Modi and vowing to defeat terrorism while acknowledging that India had suffered terror strikes, including the deadly 2008 attacks that killed 164 people.

In the Indian capital Wednesday morning, a small group of men from the right-wing Hindu nationalist group Hindu Sena celebrated Trump's victory at a central protest ground, where they brandished posters and photos of the U.S. president-elect while dancing and sharing sweets.

Indonesians on social media are questioning why Americans have voted in big numbers for billionaire Donald Trump, who many in the world's most populous Muslim country perceive as intolerant and reactionary.

Twitter, Facebook and chatrooms in instant messaging apps are buzzing with speculation about whether Trump would follow through on campaign rhetoric that included a ban on Muslims entering the U.S.

Some people say that under a Trump administration they fear they'll be prevented from visiting relatives and friends who live in America or traveling there as tourists.

About 100,000 Indonesians live in the United States.

President Joko "Jokowi" Widodo says on national television that his government will work with whoever becomes president.

And in Southeast Asia, there were congratulations from the offices of the Burmese president and the office of Philippine President Rodrigo Duterte, which released a statement saying the Philippines looked forward to enhanced relations with the U.S. anchored on “mutual respect.”

Congratulations to President-Elect Donald Trump. SG will strive to keep working together with US. – LHL https://t.co/sU6nCfISfN

And Thai junta leader Prayuth Chan-ocha said Thailand would “cherish” its ties with the U.S., saying, “”We have to be prepared and adjust ourselves to change. We have to be on the offensive and apply a balanced foreign policy with every country in the world that is our trade or dialogue partner,” according to the Bangkok Post.

Rwanda’s President Paul Kagame also congratulated Trump on his “well earned victory,” adding he was looking forward to a continued good relationship with the U.S.

Turkey's prime minister has called on Donald Trump to extradite a U.S.-based Muslim cleric Fethullah Gulen - blamed by Ankara for the failed coup in July - as soon as he is sworn in.

Binali Yildirim also said Wednesday that he hoped that the new leadership in the United States would take into consideration Turkey's "sensitivities concerning the fight against terrorism," give priority to policies that would bring peace and stability to the region and advance traditional friendship between the two countries.

Ties between the two allies have been strained over perceptions in Turkey that the United States is reluctant to arrest and extradite Gulen. Turkey's is also frustrated by Washington's backing to Syrian Kurdish militia that are fighting the Islamic State group in Syria and which Ankara considers to be a terrorist group.

Iran's President Hassan Rouhani said the U.S. election results would have no effect on Tehran's policies, state news agency IRNA quoted him as saying, noting that Iran's expanding economic ties with the world were irreversible.

"The results of the U.S. election have no effect on the policies of the Islamic Republic of Iran," Rouhani said.

"Iran's policy for constructive engagement with the world and the lifting of nuclear-related sanctions have made our economic relations with all countries expanding and irreversible."

He added that Iran's nuclear deal with six world powers has been reflected in a United Nation Security Council resolution and cannot be dismissed by one government.