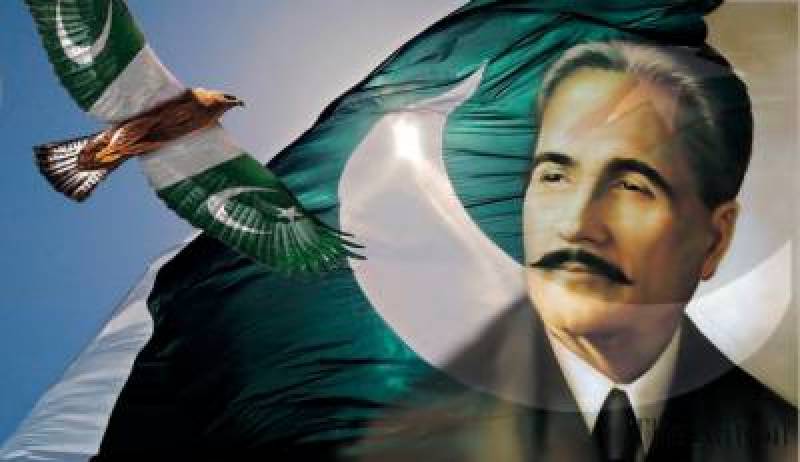 LAHORE – The 143rd birth anniversary of national poet and philosopher Dr Allama Muhammad Iqbal is being observed today (Monday) all over the country to pay tribute to the ‘Poet of the East’.

A ceremony of change of guard was held at the mausoleum of Allama Iqbal in Lahore on Monday morning. A smartly turned out contingent of Pakistan Navy assumed the responsibility of guard from Pakistan Rangers.

Station Commander of Pakistan Navy Commodore Naimatullah Khan laid a floral wreath at the mausoleum and offered prayers. He also penned down his comments in visitors’ book and paid tribute to the national poet.

Prime Minister Imran Khan in a tweet said Iqbal's thoughts continue to inspire & guide. "He is a great mystic, with a pure spirit, delivered of materiality and, at the same time, a man who respects and honours science, technological progress, and the advancement of human reason in our age."

"He is a great mystic, with a pure spirit, delivered of materiality and, at the same time, a man who respects and honors science, technological progress, and the advancement of human reason in our age."https://t.co/QGx0Gyvrp3

Chief Minister Punjab Sardar Usman Buzdar visited the mausoleum of Poet of the East Allama Muhammad Iqbal, on Friday. He laid a floral wreath and offered Fateha, wrote his expressions in the visitors’ book.

Exhibition of rare books along with picture exhibition of Allama Iqbal would be held at Iqbal Manzil. People will visit the graves of parents and other family members of Allama Iqbal at Imam Sahib graveyard Sialkot to offer Fateha and lay floral wreaths there.

Paying the tribute to Poet of the east, Prime minister Imran Khan said, Iqbal had decided to guide the Muslims of the subcontinent with his thoughts and poetry at a time when they were in search of their identity. With his poetry, Iqbal invoked that power with which the Muslims overcame their sense of despondency, guiding them to achieve the impossible, he added.

Iqbal was born on 9th November 1877 and died on 21 April 1938. He is also recognised as a national poet, and known as Muffakir-e-Pakistan (thinker of Pakistan), Shair-e-Mashriq (poet of the east) and Hakeemul Ummat (doctor of the Muslim ummah).

His poetry in Urdu and Persian is still considered the greatest in the modern era.

Allama Iqbal firstly used the word “nation” for the Muslim of the sub-continent and his vision play a crucial role that now Pakistan is an independent state.