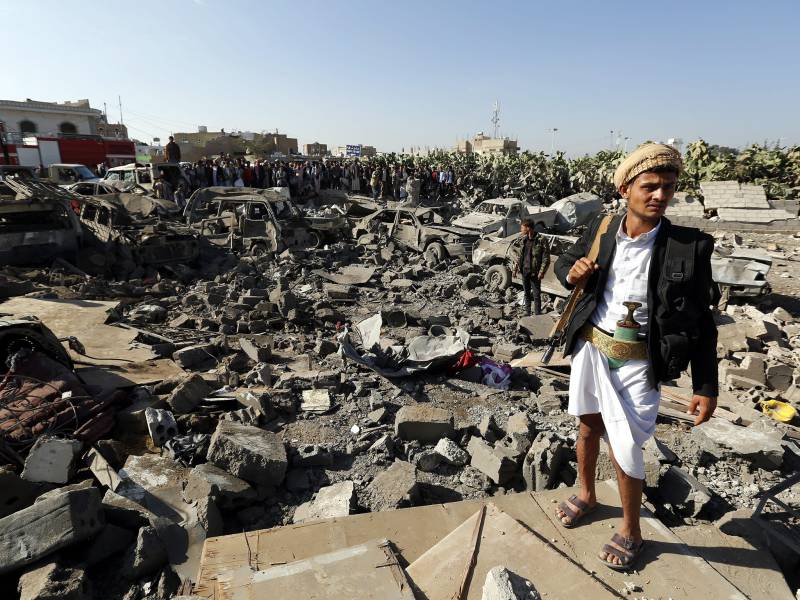 Ayatollah Ali Khamenei said Saudi Arabia would not emerge victorious from the war in Yemen, where Houthi fighters who control the capital Sanaa have been trying to seize the southern city of Aden from local militias.

Iran has repeatedly urged a halt in the air strikes and called for dialogue in Yemen, but Khamenei's comments are the most critical yet from Tehran about the offensive by Saudi Arabia and its Arab allies.

"This is a crime and genocide that can be prosecuted in international courts ... Riyadh will not emerge victorious in its aggression," Khamenei said.

Iranian President Hassan Rouhani also criticised the coalition assembled by Riyadh, saying it was repeating errors committed in other parts of the Arab world where Saudi Arabia and Iran back rival sides.

They were speaking a day after Iran said it was sending two warships to sea off Yemen and a spokesman for the Saudi-led coalition repeated Riyadh's accusations - denied by Iran - that it has trained and equipped the Houthi forces.

Relentless air strikes have not stopped the Houthis, backed by soldiers loyal to former president Ali Abdullah Saleh, from advancing into central Aden.

The fighting has killed more than 600 people and displaced more than 100,000, according to the United Nations. Aid workers have warned of a looming humanitarian catastrophe.

Houthi fighters and troops loyal to Saleh entered the provincial capital of the Shabwa province in eastern Yemen on Thursday, residents said.

Local tribal chiefs and security officials aided the entry of the Houthi forces to Ataq, where they took control of local government buildings and security forces' compounds, according to residents.

It was the first time the Houthis, from the Zaidi branch of Shia Islam, and forces loyal to Saleh had entered the city, where the fiercely Sunni Muslim Awlaki tribe comes from.

The takeover brings them closer to Yemen's most prized economic asset, the Belhaf gas facility and export terminal, on the Arabian Sea about 160 km (100 miles) to the southeast.

In another symbolic gain for the Houthis, a YouTube video surfaced on Thursday that appeared to confirm the capture last month by the Houthi fighters of Hadi's brother Naser Mansour Hadi, a senior intelligence official in the south.

Earlier in the day, residents of the al-Siddah district in central Yemen said they woke to find al Qaeda flags flying over local government offices.

They said a group of al Qaeda militants led by a local commander known as Ma'moun Hatem, took over the district at night. Residents said the Houthis, who had been in control of the town for more than two months, retreated without a fight.

Al Qaeda in the Arabian Peninsula (AQAP), one of the most active branches of the network founded by Osama bin Laden, has exploited the security vacuum - and the withdrawal of US personnel carrying out drone strikes against it - to entrench itself further in the country's remote eastern reaches.

Last week, AQAP captured the eastern port city of Mukalla. Residents said tribal fighters were deployed to push AQAP out, but that parts of the city were still under AQAP control.

The Houthis, who captured Sanaa in September, have said their recent advances are aimed at fighting al Qaeda.

Warplanes from the Saudi-led coalition struck military targets and weapons stores near the capital under Houthi control, as well as northern areas near the border with Saudi Arabia and in Yemen's south, local officials said on Thursday.

Aid agencies have struggled to fly emergency supplies into the country, already one of the poorest in the Arab world.

A plane loaded with 16 tonnes of medical supplies had to turn back in midair because the window for landing at Sanaa closed at noon, a spokeswoman for the International Committee of the Red Cross said.

"You can’t land after that because the (air) strikes start, and the fighting," Sitara Jabeen said.

UNICEF's Yemen representative Julien Harneis said the UN children's agency has tried for a week to get an aid flight in. "Every day there's been a different problem that just popped up," he told Reuters in Geneva.

He said rates of acute malnutrition could soar within weeks and threaten the lives of more than a quarter of a million children in Yemen.