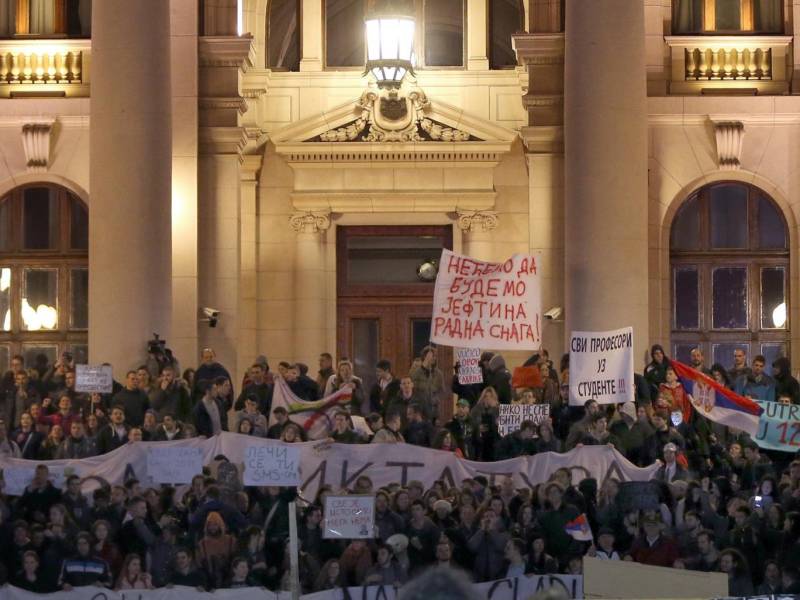 BELGRADE - Thousands of protesters in Serbia gathered outside the government headquarters in Belgrade on Saturday to rally against corruption and accused the media of turning a blind eye to the protests.

The protests erupted after the overwhelming election victory of Prime Minister Aleksandar Vučić who won the presidential election last Sunday with 55 per cent of the vote.

Protesters have called Mr Vučić an autocrat and have accused the Serbian Progressive Party (SPP) of corruption and of being instrumental in what they say was a fraudulent election.

Widespread demonstrations are being held and the attendees accused the media regulator and top editors of the state-owned RTS TV for allegedly failing to facilitate a free and fair vote.

'We are here to demand more democracy, an end to Vučić’s dictatorial regime and a better future, more jobs and a better education system,' said a 21-years-old Djordje Peric.

The opposition alleges the vote was marred by “irregularities”, including muzzling of the media, as well as voter intimidation and bribes on election day.

On the other hand, government officials have deflected the blame towards opposition members who they think are behind the demonstrations.

It may be mentioned that as per Press Freedom Index report,  Serbia ranks 59th out of 180 countries for the year 2016. Media freedom in Serbia has “declined ever since Aleksandar Vučić, Slobodan Milosevic’s former information minister, became Prime Minister in May 2014,” the organisation says on its website.

While the protests are underway, Mr Vučić who served as the information minister would assume charge as prime minister on May 31, 2017.