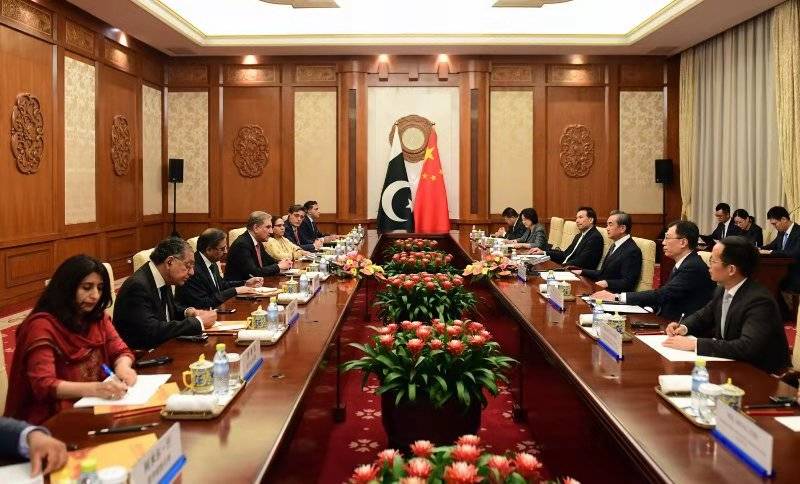 BEIJING - China has expressed serious concerns on the latest escalation of tensions in Kashmir.

Chinese Foreign Minister Wang Yi while talking to his Pakistani counterpart Shah Mehmood Qureshi in Beijing today said the Kashmir issue is a dispute left from the colonial history and it should be properly and peacefully resolved based on the UN Charter, relevant UN Security Council resolutions and bilateral agreement.

Wang Yi said his country will continue to support Pakistan in safeguarding its legitimate rights and interests and uphold justice for Pakistan on the international arena.

He said China believes that unilateral actions that will complicate the situation should not be taken, the Radio Pakistan reported.

He stressed that as all-weather strategic cooperative partners, China and Pakistan have understood and supported each other on issues concerning our respective core interests.

Wang Yi called on both Pakistan and India to proceed from their national development and peace in South Asia, properly resolve historical grievances, get rid of the zero-sum mindset, avoid unilateral action and seek a new path to peaceful coexistence.

Later, talking to media after his two and half hours long meeting with his Chinese counterpart Wang Yi in Beijing today, Foreign Minister Shah Mehmood Qureshi said China fully supports Pakistan's decision to go to UN Security Council over Kashmir and assured complete cooperation in this regard.

He said the Chinese side agreed that steps taken by India are unilateral that have changed the status quo and structure of occupied Jammu and Kashmir.

Wang Yi also agreed that Indian steps could jeopardize the peace and stability in the region.

The Foreign Minister said his Chinese counterpart was in concurrence that Jammu and Kashmir has been recognized as a disputed region and its resolution should also be in the light of UN resolutions.

He said the Chinese side was informed that after lifting of curfew in occupied Kashmir, a new era of atrocities could start in the territory evoking reactions.

Foreign Minister Makhdoom Shah Mahmood Qureshi has left for Islamabad after a successful visit to China.

During his visit, the Foreign Minister met with his Chinese counterpart and apprised about the deteriorating law and order situation in occupied Kashmir. China assured full support to Pakistan in this regard.