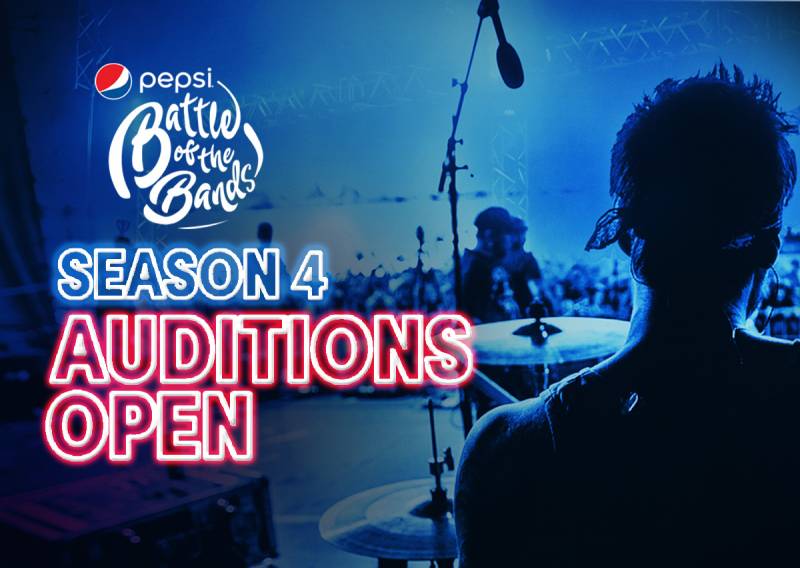 Music, passion, and originality; these are the characteristics that define Pepsi Battle of the Bands. Inarguably the biggest music competition in the country is all set to launch Season 4 and we can't wait to see fresh young voices to take the stage and stun us with their talent.

Are you the next big band to rock the music scene? Register your band for Pepsi Battle of the Bands Season 4 Auditions at http://bit.ly/2Slh1J4 ! T&Cs Apply: http://bit.ly/2I2LsPx #TheBattleIsOn

Although the music industry, over the years, has produced some amazing individual singers, however, it couldn't provide a favorable environment for the bands. This void, thankfully, was filled after Pepsi Battle of the Bands was launched once again in 2017 after a gap of more than a decade and Pakistani music industry saw the return of  Pepsi Battle of the Bands. Season 2 and 3 were power packed with magical performances and gave us bands like Kashmir, Bayaan, Tamasha, and Xarb. Their heartfelt performances left us wanting for more.

Pepsi Battle of the Bands announced the launch of Season 4 on social media, giving an opportunity to budding bands of Pakistan to show their talent and be the part of the biggest music battle in Pakistan. The registration for auditions is open now!

The top bands from the auditions will be selected by the judges to compete on stage and amaze us with their surreal performances.

Pepsi Battle of Bands isn’t just an opportunity to showcase their talent and get fame, but it also gives them a chance to learn from maestros and transform themselves. The guidance and experience of Pepsi Battle of the Bands can take you places and we can bet on that. The competition creates a super healthy environment that leads to the unveiling of the hidden talent within you! Think you have got what it takes to compete in the biggest music competition in the country? Register now & get ready for the auditions!

Register your band for the auditions now: https://www.pepsibattleofthebands.com/auditions/apply

Pepsi Battle of the Bands has lived up to its hype as the years are progressing. Top bands like Aaroh are their praiseworthy products. Post competition in September 2003, Aaroh released their debut album Sawaal, with Jason Anthony on drums.

The runner up of the first season EP also went on to achieve overnight fame and success with their music and launched stars like Fawad Khan.

They also launched the success of many other bands who took part in the show, particularly Mekaal Hasan Band and Mizmaar. Furthermore, more recently Twenty-One or 21-the Band has surely caught the attention of all music-lovers ever since they found their platform at Pepsi Battle of the Bands.

Band Tamasha brought such vigour to the music scene during and post Pepsi Battle of the Bands last year. Their rendition of the power-packed ‘Raag Neela’ was incomparable to any other performance throughout the season, but in the end it was Xarb and Bayaan's intense rivalry that created spectacular music and wone over the audiences.

Season 2 of Pepsi Battle of the Bands gave us some even more iconic bands like the quirky and melodic Pindi Boys and the rocking Kashmir. Kashmir is also one of the innovative bands that created a different kind of music and gained a massive following and accolades becoming one of the few purely rock bands to break into the mainstream.

Pepsi Battle of the Bands is the only platform that is truly reviving the band culture in Pakistan. Youth coming together, experimenting with genres, creating something mesmerizing is what band culture was all about and unfortunately missing from the Pakistani music scene before this platform. We can't wait to see what Pepsi Battle of the Bands has for us in Season 4. If you have what it takes to rock the music scene, register now for auditions at: https://www.pepsibattleofthebands.com/auditions/apply