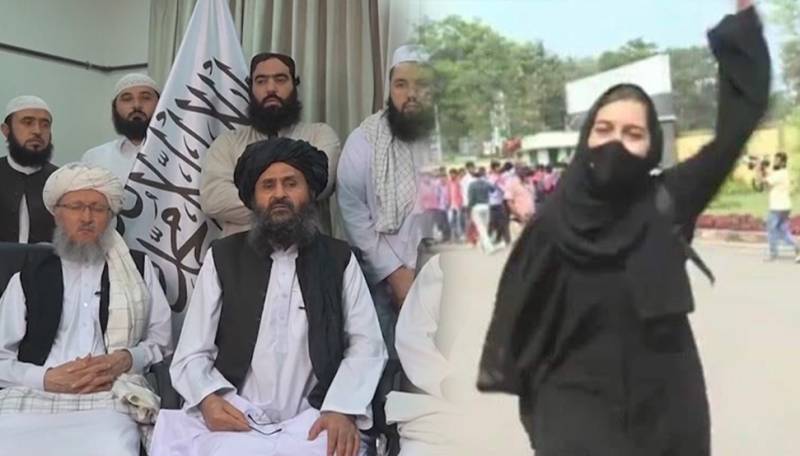 KABUL – As politicians, celebrities and activists condemned the ongoing Hijab row in India’s southwest region, Taliban officials also extended their support to Muskan Khan for standing up for Islamic values.

The Deputy spokesman Afghanistan, Inamullah Samangani, shared a tweet as a hijab-wearing student was heckled by a right-wing while she refused to step back and chanted Allahu Akbar.

“The struggle of Indian Muslim girls for hijab shows that hijab is not an Arab, Iranian, Egyptian or Pakistani culture, but an Islamic value for which Muslim girls around the world sacrifice in various ways and defend their religious value”, Taliban official wrote on microblogging platform and shared the viral picture of the Muskan who stands against Hindutwa inspired mob.

Indian Muslim girls struggle for Hijab shows that Hijab is not an Arab, Iranian, Egyptian or Pakistani culture, but an Islamic value for which Muslim girls around the world, especially in the secular world, sacrifice with different types and defend their religious value.#Muskan pic.twitter.com/VfkNR2qCmb

Taliban official said it was pleasing to see Muslim women stand for their religious values and make sacrifices to defend it in various ways, especially in the ‘secular world’.

Following the takeover of the war-ravaged country in August 2021, Taliban spokesman Suhail Shaheen clarified that the group will not force women to wear the full burqa instead, the hijab would be compulsory.

Meanwhile, the incident with an Indian girl, who was terrorized by Saffron terror, drew condemnation from the politicians, celebrities. Nobel peace prize winner Malala Yousafzai, said the situation was “horrifying” and called on Indian leaders to stop the “marginalisation of Indian women”.

The hijab controversy started erupted last month when a state-run college denied entry to eight women wearing hijab. The Muslim women then moved the high court seeking permission to attend classes with hijab, stating that it is their ‘fundamental right’ granted under Article 14 and 25 of the Indian Constitution and ‘integral practice of Islam’.

Meanwhile, all educational institutions were closed in Karnataka after the state-runschools imposed a ban on hijabs, which sparked widespread protests.

Amid the rising Islamophobia in India, a Burqa-wearing Muslim student has made headlines after her video went viral ...

On Wednesday, the Karnataka high court referred petitions challenging the ban to a larger panel as masses demonstrated against the ban in India's largest cities.