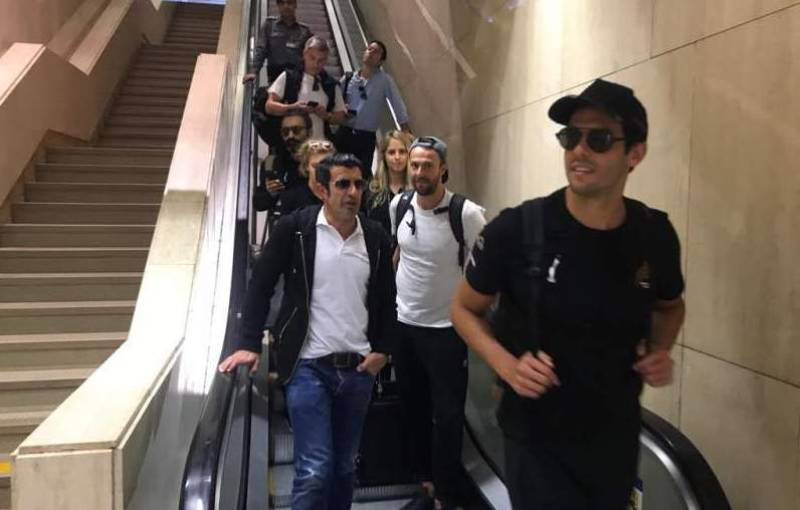 The two former Real Madrid superstars landed at Karachi's Jinnah International Airport and were welcomed with the traditional Sindhi Ajrak and Topi.

In a Twitter post on Wednesday, Kaka had said he was looking forward to spending a few days in the South Asian country.

Hello Pakistan! I’m on my way. Looking forward to spend a few days with you guys.

Meanwhile, Portugal's legendary footballer Figo said, “It’s exciting to see another emerging country in Asia embrace football.  I’m certain in a population of 220 million there must be huge potential waiting to emerge into the international scene.”

During their much-anticipated visit, the former football icons will promote World Soccer Stars which is organised to promote the sport in Pakistan.

The administrative body of WSS has announced to conduct two matches in Karachi and Lahore. The event will be held between April 26 and April 29.

Kaka, a superb attacking midfielder from Sao Paulo, played 92 matches for Brazil during his illustrious career from 2002 to 2016. Kaka was only 20 when he was inducted into Brazil’s 2002 World Cup squad which won the title.

Figo, the 46-year-old former winger, played 127 matches during his impressive career from 1991-2006. He scored 32 goals. During his professional career (1989-2009) he played 577 matches and scored 93 goals while representing Real Madrid, Barcelona, Inter Milan, and Sporting CP.