Media group publishes lies in the name of Panama Papers, quietly removes them without apology 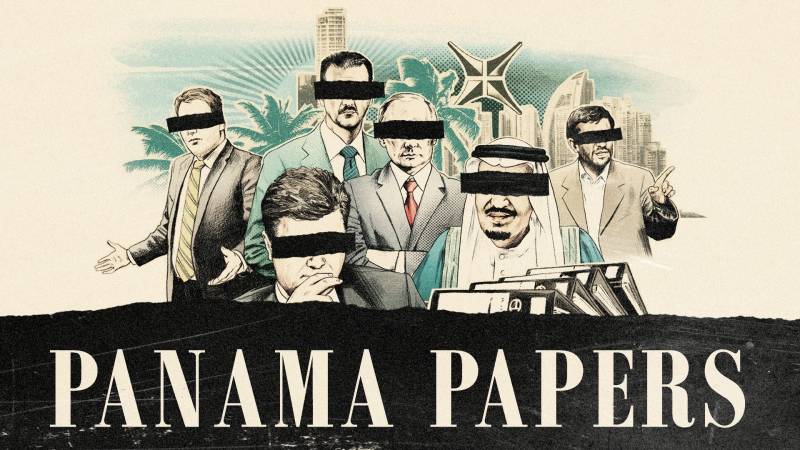 LAHORE (Staff Report) - While one of ICIJ's representatives in Pakistan, Mr. Umar Cheema and his organisation The News International continue to insist that Abdul Aleem Khan, a Pakistan Tehreek-e-Insaf (PTI) leader, was named by the Panama Papers, the public database released by the ICIJ yesterday shows otherwise.

According to the publicly accessible database, not even a single offshore entity has been registered in Abdul Aleem Khan's name. He is not a shareholder of any offshore company listed in the documents leak either. As the screenshot below shows, a quick search for Aleem Khan's name in the database returns with no results. 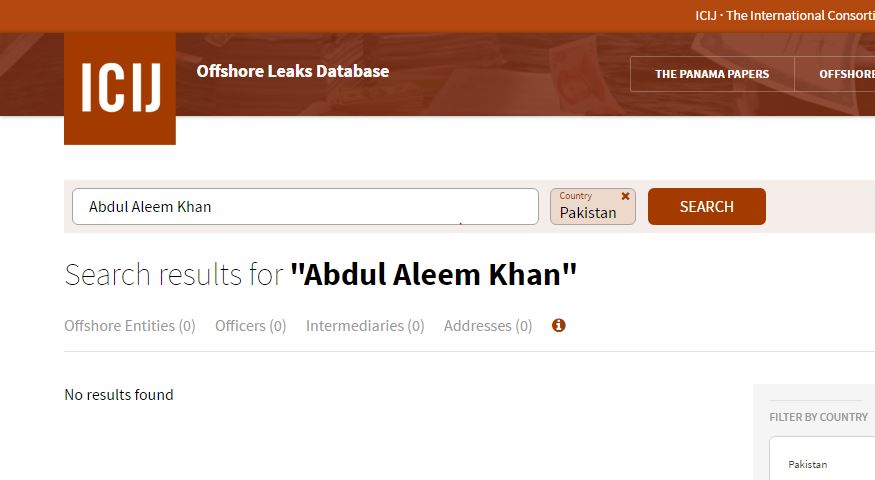 Earlier, in a May 9 news report penned by star journalist Umar Cheema, The News International has made claims that were contrary to the facts and Aleem Khan's repeated clarifications on the issue.  In this report, The News not only alleges that Aleem Khan owns an offshore company; it also claims that "[according to] information available with Cheema, the PTI leader is [the] chief executive [of a certain offshore company]."

However, the online version of the same story was silently edited by The News International, immediately after the publication of Panama Papers database by ICIJ. In fact, the edited version of report titled "Pakistanis in Panama papers: more names named"(as accessed by Daily Pakistan Global on Tuesday morning) does not mention Aleem Khan's name at all. Instead, it includes a statement of the PTI leader in which he has asserted confidently that his name does not feature in Panama Papers.

Abdul Aleem Khan, who openly accepts that he owns offshore companies, says that details of his properties abroad had been provided to the Federal Bureau of Revenue (FBR) upon his nomination on the PTI ticket in the by-election he contested last year against National Assembly Speaker, Sardar Ayaz Sadiq.

Since the ICIJ disclosures made headlines earlier this year, a number of dubious news reports have been published on the subject by The News International.

Whether The News reported the facts incorrectly by mistake or by design, the effect of its editorial conduct has been to drag opposition parties like the PTI into the Panama Papers controversy.

The paper has often been criticized for harboring sympathies for the current ruling party by some observers. Its political "affiliation" was also hinted at by Group Editor Shaheen Sehbai after tendering his resignation recently in response to another controversial developments.

The News International and its sister Urdu daily Jang published a news report titled "Nawaz’s name mistakenly appears in news on Panama Papers: ICIJ," which claimed the International Consortium of Investigative Journalism had "accepted its mistake of publishing Nawaz Sharif's name in Panama Papers story and tendered an apology as well."

The ICIJ, however, has called that particular report "widely misleading". Nawaz Sharif's name can still be found in the documents leak, a statement by ICIJ said.

Interestingly, while The News International is evidently trying to prove that Prime Minister Nawaz Sharif has no connection with the Panama Papers or the offshore companies of his children, it is simultaneously trying to drag PTI into the leak.

In its May 9 news report, the newspaper also emphasized that Imran Khan's closed friend and financier Zulfikar Bokhari also owns offshore companies. In fact, Bokhari is a British national by birth and owns no properties in Pakistan whatsoever.