Dalit family bares it all to protest Indian police atrocities 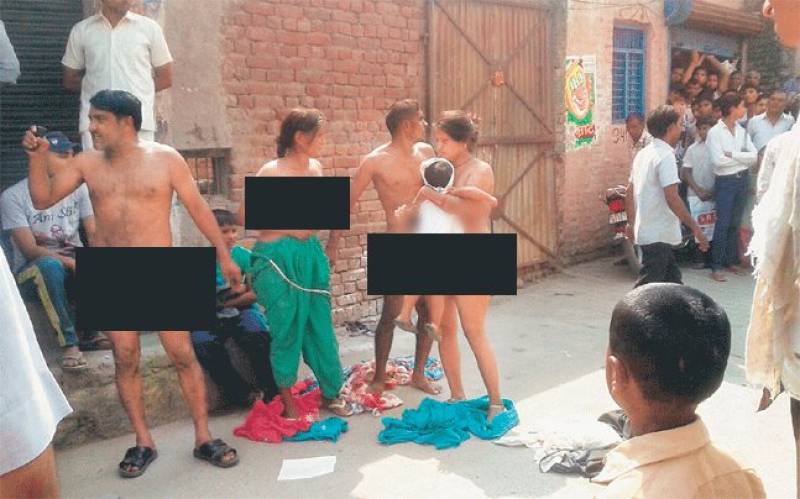 Uttar Pradesh (Web Desk) - A National Commission for Scheduled Castes team on Friday visited the Dankaur area in Uttar Pradesh's Gautam Budh Nagar and met the Dalits, who were arrested on charges of public obscenity.

Five people, including three women, were arrested on Thursday after they allegedly stripped in a market in Dankaur in Gautam Budh Nagar, to protest the police's alleged refusal to register a complaint of robbery.

The whole episode flared up after a video of a naked Dalit family protesting against alleged inaction of the Uttar Pradesh Police in Gautam Budh Nagar district went viral in social media on Thursday.

Media reports said that the Dalit couple resorted to nude protest after the Greater Noida police failed to register their FIR of an alleged robbery despite their requests.

According to reports, one Sunil Gautam, approached the Dankaur police station on Wednesday along with his wife and other family members to file a case of robbery against his neighbour Mahavir, with whom he also had a land dispute. "Mahavir attacked our house on Wednesday night along with his men and robbed us of valuables.

We immediately informed the police but they were in no mood to arrest him. Instead, they were trying to protect him." Gautam said.

After a heated argument with the cops, the family went out of the police station and bared it all alleging that the police were trying to defend the accused.

"We had already registered a case against Mahavir and others against whom the family had filed a compliant.

We are also conducting raids to arrest the accused.

On Thursday, they came to the police station and entered into a scuffle with me and other policemen.

I tried my best to pacify them but they even attacked me with a rod and tried to snatch my service revolver", station officer of Dankaur police station Praveen Yadav said.

Some other reports, however, said that the couple was beaten up badly by the cops and stripped naked.

Dismissing the allegations that the police paraded the family nude, Yadav said, "We made all efforts to prevent them from doing this and even tried to cover them with their clothes.

However, by the time women police officers managed to reach the spot they had already created a scene".

While the police tried to pacify the family, some passerbys filmed them and posted the video on social networking sites, which later went viral.

As the news spread, senior police officials reached the spot along with women police force and the family was taken away.