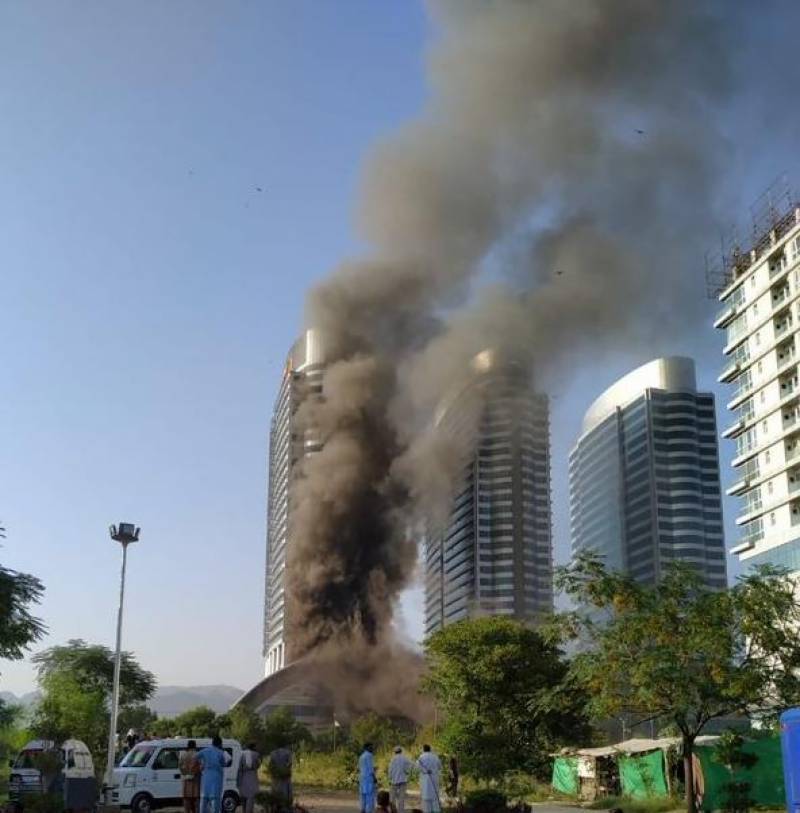 ISLAMABAD – The Deputy Commissioner of the federal capital city has formed a fact finding committee to look into the fire incident at Centaurus mall.

Additional District Magistrate Islamabad will be the convener of the committee while officials of Capital Development Authority (CDA), Islamabad Capital Territory (ICT) and other concerned department will be members of the committee, according to a notification shared by DC Irfan Nawaz Memon on Twitter late Sunday night.

A massive fire broke out at the Islamabad’s largest shopping mall at 4pm on Sunday, a day when huge number of families used to visit the iconic tower. However, no one injured in the incident as rescue teams managed to safely evacuate the people.

ISLAMABAD – A huge fire broke out at Centaurus Mall in Islamabad on Sunday. No loss of life was reported as ...

The fire was brought under control after two hours as the fire brigade, Pakistan Navy, Pakistan Air Force and Rescue 1122 took part in the firefighting operation.

The DC Islamabad said that the shopping mall will remain closed until the investigation into the incident is completed, saying safety of precious lives more important than all other things.

He said that the traders are allowed to take out their valuables.

Deputy Commissioner, ICT, has constituted a fact finding committee to look into the fire incident at Centaurus mall. pic.twitter.com/NRM1I1HCGN

The general manager (GM) of Centaurus Mall, Amir Khawaja, told media said that it was not a major fire incident, adding that only one shop damaged by it.

He said that the mall’s team has investigated the matter and found that the fire had started from the kitchen and later it spread to other areas. Thankfully, no loss of life was reported in the incident, he said.

The GM said that overseas Pakistanis have made investment in the mall, adding that people residing in the mall are also being asked to vacate their apartments.

Meanwhile, a couple of ministers from the Azad Jammu and Kashmir came hard on the government for sealing the mall after the fire incident, calling the move a revengeful act.

The AJK food minister cried out of vengeance by the federal government in guise of action against fire incident at the mall.

He also warned of launching protest if the city administration did not allow reopening the mall.

The AJK finance minister said that actions being taken by the capital city administration following the fire incident are revengeful as the mall is owned by AJK prime minister, who is also a leader of Imran Khan-led PTI.

Prime Minister Shehbaz Sharif has also expressed sorrow over the fire incident at Centaurus Mall and ordered the authorities to investigate the matter.

ISLAMABAD – Firefighters on Sunday brought under control a huge inferno that engulfed the country’s largest ...