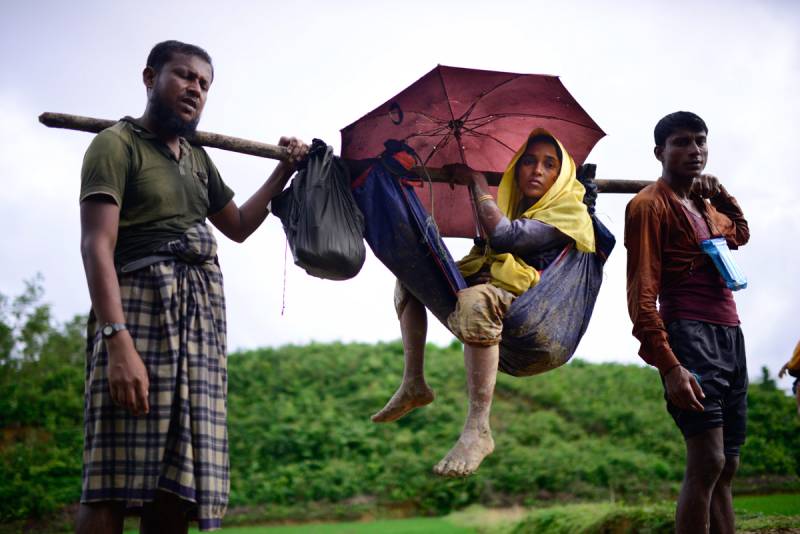 As tens of thousands of persecuted Rohingya Muslims have been forced to flee their homes in Burma's western Rakhine state, unusually grim visuals from the scenes have sent shock waves across social media.

Rohingya Muslims as old as 105 are pouring into Bangladesh without even having any basic facilities of medical or shelter.

In lines stretching deep into the horizon, Rohingya Muslims - 80 percent of whom are women and children - have crossed into southeast Bangladesh after making the long and arduous trek from the impoverished region of Rakhine state.

Narrating accounts of massacres at the hands of Myanmar security forces and Buddhist vigilantes that started on August 25, the sick, wounded and elderly people have received a cold and hostile reception by their closest neighbour.

"I've carried my mother on my back for 4 days on foot after Myanmar army torched our homes," said one displaced Rohingya Muslim.

"I've carried my mother on my back for 4 days on foot after Myanmar army torched our homes," says displaced Rohingya Muslin. pic.twitter.com/7Frnlvnq0F

The Rohingya, an ethnic Muslim group who have lived in Myanmar's Rakhine State for centuries, have suffered decades of repression under the country's Buddhist majority.

Stripped of their citizenship by the military junta in the 1980s, they have endured killings, torture and mass rape, according to the United Nations.