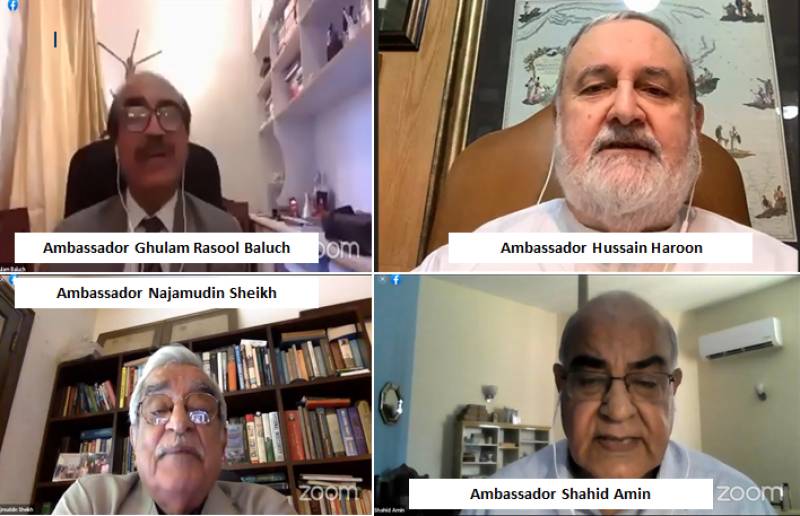 Ambassador Shahid Amin said that China’s concentration is to increase its economic strength while raising its military profile. He mentioned that China or India do not want to enter in a war because both countries are focusing on their economic growth. Commenting on the China-India military standoff, he said that China has given India a proof that its military is stronger.

Furthermore, China has signaled to India that no disruption in CPEC will be acceptable.

Talking about CPEC, he said that its scope is broadening as more projects are being completed. However, Pakistan must not become dependent on China and should focus on its sovereignty and security.

Ambassador Hussain Haroon said that while the West has put the world into colonies, China is using its economic might to elevate its status. He said that the Western era is dawning and India does not want to be a part of this equation. Mr. Haroon said that China showed an aggressive stance by building islands in the South China Sea but the intent of the US against China is also not suitable.

Ambassador Najamuddin Shaikh said that the US and especially the Trump administration are trying to neutralize the US relations with China for Trump’s chance for re-election. He said that terrorism has been a long term adversary of the US.

China, according to Mr. Shaikh, is the next adversary for the US but a much less belligerent one.

The panelists were of the view that Pakistan needs to work on improving its good governance, fortify its economy and enhance its foreign policy objectives so to counter any security implications that may arise because of China-India military standoff.