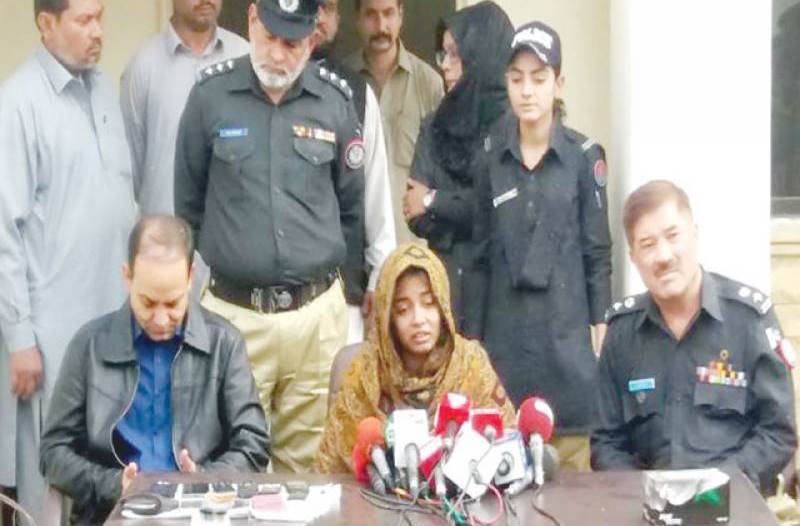 KARACHI - A 20-year-old girl has confessed to killing her own teenage sister after police found evidence against her while probing a robbery case.

On December 6, an incident of a robbery was reported in an area of Malir in which a  16-year-old girl, Aleena was found stabbed to death and her sister, Alveena, injured at the crime scene.

As the police launched investigations, the officials found Alveena suspicious and started probing her.

On Sunday, Senior Superintendent Police (SSP) Korangi Nauman Siddiqui during a press conference confirmed that Alveena was trying to cover the crime by making it seem like a robbery attempt. He added that the culprit had confessed to the crime.

Alveena, who was also present at the press conference, said that she with the help of her fiance, Mazhar, killed her sister after she blackmailed her with lewd pictures and videos.

The accused claimed that her younger sister's friends - Abbas and Ahsan - had made an objectionable video of her and were blackmailing her. She added that Aleena was forcing her to become friends with Abbas, threatening to upload the pictures and videos on social media.

Alveena said that she with Mazhar resorted to killing her sister after she refused to delete the videos and pictures. She said that her sister was torturing her mentally due to which she slit her throat with a sharp knife with Mazhar's help.

During the press conference, she also said that blackmailers should be given strictest punishment.

According to police, the culprits tried to appear the incident as robbery after killing the teenager. The SSP said that six mobile phones and knife have been recovered. He also urged the parents to keep an eye on children after giving them such devices.