PDM doesn't need to come to Rawalpindi, if they come, we will offer tea: DG ISPR 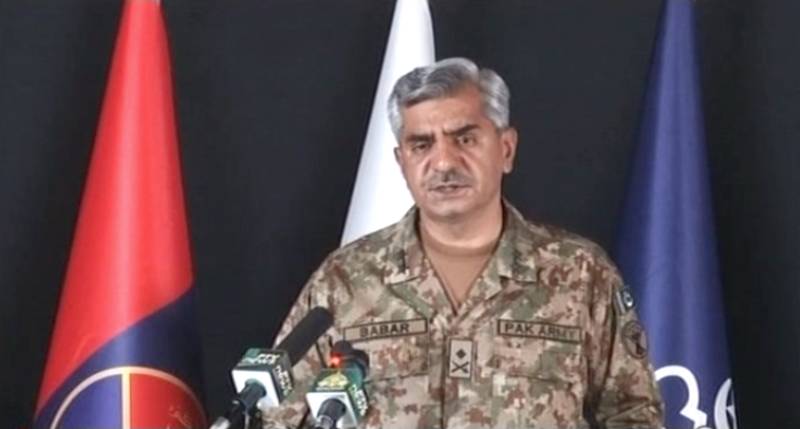 ISLAMABAD – No organised terrorist structure is operating in Pakistan, said the military's spokesperson during a media briefing on Monday (today).

The purpose of the press conference is to comparatively analyse the security and border situation in Pakistan, Major General Babar Iftikhar said in the start of his presser.

"Last 10 years were a challenging time in every aspect for the nation," the DG ISPR said, adding that in 2020 alone, "the Covid-19 pandemic and locust attacks put our food security and economy in danger."

Pakistan has observed a considerable decline in terrorism activities. He also highlighted the successful operations as 371,000 intelligence-based actions were conducted under the umbrella of Radd-ul-Fasaad operation in the last three years.

Comparing the situation with 2007-08, he mentioned that only 37 per cent of the areas in the tribal areas were under state control at that time. All of those regions are a part of Khyber Pakhtunkhwa region now.

Lambasting at Indian armed forces for unprovoked firing along LOC, he said that India is involved in deaths of innocent civilians other than the Pakistani soldiers.

Their plan is clear as the Indian government doesn’t want peace and stability in Pakistan, he added.

Maj Gen Iftikhar also mentioned the banned organisations which were being facilitated by Pakistan opposing factors to create unrest near the western border.

He said regardless of all these ongoing challenges, the state, armed forces and foremost the Pakistani nation faced these challenges with bravery.

Pakistan Military Spokesman said that in the war against terror during the last 2 decades, all terror networks were destroyed, at least 18,000 terrorists were terrorists killed so far.

Pakistan suffered in all terms as we have lost around 126 billion USD while 83,000 lives have lost so far.

The Pakistan Afghanistan fencing cemented with the blood of our Pakistani soldiers. No one dares to uproot it, he added.

While answering a question on the current political situation in Pakistan, especially after the announcement of Opposition''s Pakistan Democratic Alliance (PDM) march towards Rawalpindi, which houses the General Headquarters (GHQ), Maj-Gen Babar said that he doesn't understand Maulana Fazalur Rehman's intentions to come to Rawalpindi. "If they will come to us, we will offer tea to them."

He also explained Pakistan army’s role during the last decade, terming it “a decade of many challenges and threats,”.

Pakistan Army effectively responded and countered all these challenges posed to the country, he said, adding that "We’re investigating every aspect of all these things."