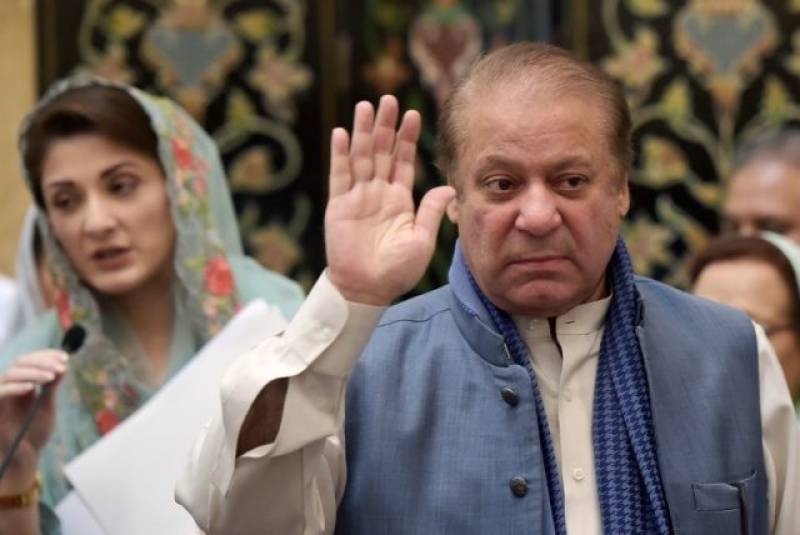 LONDON - Former prime minister Nawaz Sharif on Wednesday — two days before he is scheduled to land at Lahore — said that he is returning to Pakistan from London to fulfil his pledge to "honour the vote".

Addressing a press conference in London with his daughter Maryam by his side, Sharif said he has decided to return to the country "despite seeing the bars of prison in front of my eyes".

I will expose "hidden characters" behind this political scene, he further added, "is there any Pakistani three generations of whose family had to go through accountability only to find out that no corruption was found?" he asked.

"I am returning to fulfil the promise of giving respect to vote," Nawaz said, adding that he would not abandon his nation.

He said that he would not stop now whether he is imprisoned or taken to gallows.

"These people have not given a prison sentence to my daughter, they have given the sentence to every daughter of this nation," he said. Sharif claimed that the accountability judge had said that no evidence of corrupt practices was found against him.

"When they could not find anything for a year, they looked for the iqama, and said that I did not take an imaginary salary from my son," he alleged, adding that he was sentenced in the corruption reference even though no corruption was proven against him.

"The problem here is that they have found two different standards of justice — one standard is for me, the other is for the ladlas (favourites)."

"Ask those who dance at the news of me being sent to Adiala jail, how was a person whose name didn't appear in the Panama leaks sent to prison?"

He once again criticised the Supreme Court-sanctioned joint investigation team (JIT) that was formed during the Panamagate case, asking whether such a JIT was formed ever before which included representatives of military intelligence agencies. "Have these things been done through secret WhatsApp calls ever before?" he asked.

"Who in Pakistan's history has returned to the country even after hearing the sentence of 11 years rigorous imprisonment against them?"

"Is there any daughter in the country's history who has come back after being sentenced for eight years?

With naming anyone, Sharif questioned: "We have been put on the (FATF) grey list again. Is this your success? That you have brought Pakistan back into the grey list?"

Sharif claimed that the country's industry has been affected, CPEC and many other projects have been halted and the dollar is constantly weakening. He said the PML-N government's 5-year efforts have been jeopardised.

"My heart is wounded at the state of affairs," he said. "Our green passport cannot be given the due respect until we are rid of these illnesses."

"Have mercy on Pakistan and stop playing these games. Don't punish the nation and the country."

Sharif said the circumstances have forced him to raise the 'honour the vote' flag, and "step into the battlefield".

He maintained that he respected every institution of Pakistan, noting that he made the country a nuclear-capable state.

"I have immense respect for 'Ghazis' and 'Shuhada' of Pakistani forces in my heart," the former premier said. "The martyrs sacrificed their today for our tomorrow."

He said that they greatly loved these 'Ghazis' and 'Shuhada', and they could sacrifice everything for these sons of the soil.

Nawaz, however, said that he had set out bearing the flag of "give respect to vote."

"I'm coming to pay off the debt of the nation that thrice elected me the prime minister," he said.