NEW YORK (Web Desk) - UN peacekeepers regularly barter goods for sex with people in the countries the world body is meant to be helping, a draft UN report says.

The document by the UN Office of Internal Oversight Services (OIOS) says it has found that hundreds of women in Haiti and Liberia have been motivated by hunger and poverty to sell sex, the BBC reported.

They are paid with cash, jewellery, mobile phones and other items. 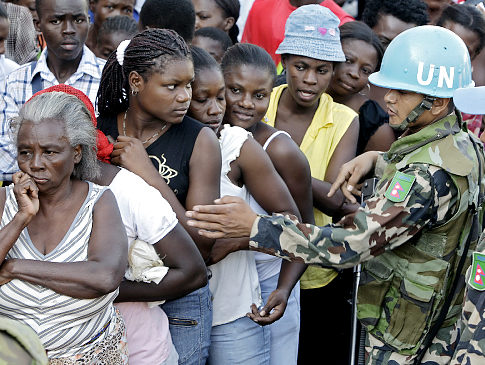 The report says 480 sexual exploitation and abuse claims were made in 2008-13.

One-third of the allegations involved children.

The UN draft report says hundreds of women surveyed in Haiti and Liberia told they had been motivated by hunger, poverty and lifestyle improvement to sell sex to UN peacekeepers, according to Reuters news agency.

Meanwhile, the Associated Press - which has also obtained the document - says that 231 people in Haiti interviewed last year told they had had "transactional sex" with peacekeepers.

"In cases of non-payment, some women withheld the badges of peacekeepers and threatened to reveal their infidelity via social media," AP reports the document as saying.

It adds that 51 such allegations were made against UN peacekeepers in 2014, down from 66 a year before.

The news agencies are also quoting what they say is a response to the draft by the UN Departments of Peacekeeping Operations and Field Support.

The departments do not dispute that underreporting remains a concern. But they also stress that there has been a significant increase in deployment of peacekeepers over the past 10 years and a large decrease in sexual exploitation and abuse allegations.

The UN currently has about 125,000 peacekeepers deployed in a number of countries around the world.