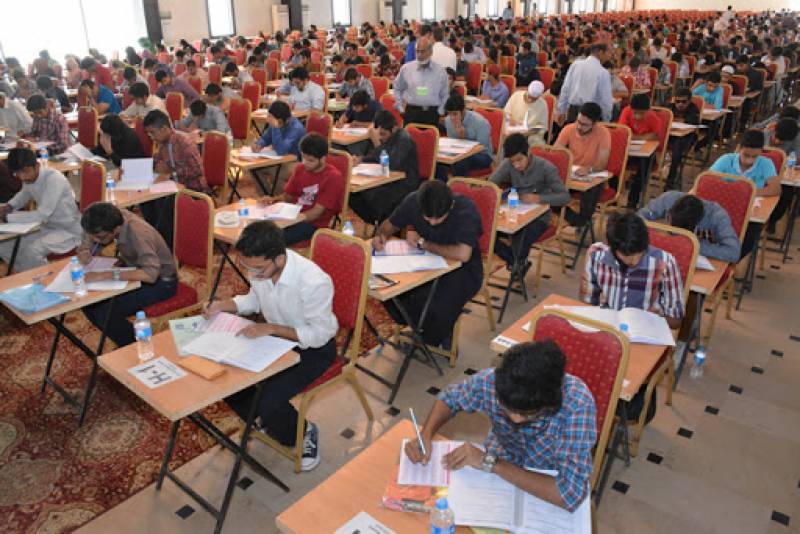 KARACHI – The Sindh High Court ) on Wednesday restrained the Pakistan Medical Commission (PMC) from conducting the Medical and Dental College Admission Test (MDCAT) 2020 till the formation of an academic board and examination authority.

A bench comprising Justice Muhammad Ali Mazhar and Justice Adnan Iqbal Chaudhry issued the order while hearing a petition filed by pre-medical students seeking cancellation of exams, which were scheduled for November 15.

The court also ordered the commission to finalise the syllabus for the Medical and Dental College Admission Test before calling the aspirants for test.

In the ruling, the SHC highlighted that since the National Medical & Dental Academic Board had not been formed under the Pakistan Medical Commission Act, 2020, the MDCAT 2020 cannot be held.

The Board will have "the powers to formulate the examination structure and standards for the MDCAT for approval of the Council," said the order.

The high court also criticised PMC’s notification stating that candidates would have the option to mark any question they believe out of syllabus. The SHC called the decision “unreasonable and nonstandard".

"This is quite a unique idea that every applicant will be provided objection form at the time of entering into examination hall, so first he should be obliged to do audit exercise as to how many questions are out of his syllabus.

"Much time of the candidate would be lapsed and consumed to go through the entire question paper as an examiner and then filling the objection forms.

"No further mechanism has been provided in the above announcement as to how and when the students appearing in the MDCAT will come to know whether objections raised by them were considered and the question considered by them to be outside the identified syllabus have been removed from scoring or not.

"Such unreasonable and nonstandard conditions amount to create hardship, distress and uncertainty amongst the candidates and their future is also on stake unless the proper syllabus is made out by the competent authority with due deliberation and examination of FSC syllabus of the country to make out a common syllabus without any doubts so that the candidates should not be asked to fill objection forms in the examination hall," the order read.

Earlier this year, PMC introduced MDCAT to bring "uniformity" into the medical field.

In October, the SHC barred the Sindh government form holding the test after conflict surfaced between federal and provincial authorities over the admission policy.

Later, the commission filed a plead with the high court seeking permission to hold MDCAT on October 18 but this time pre-medical students moved the court to cancel the test.