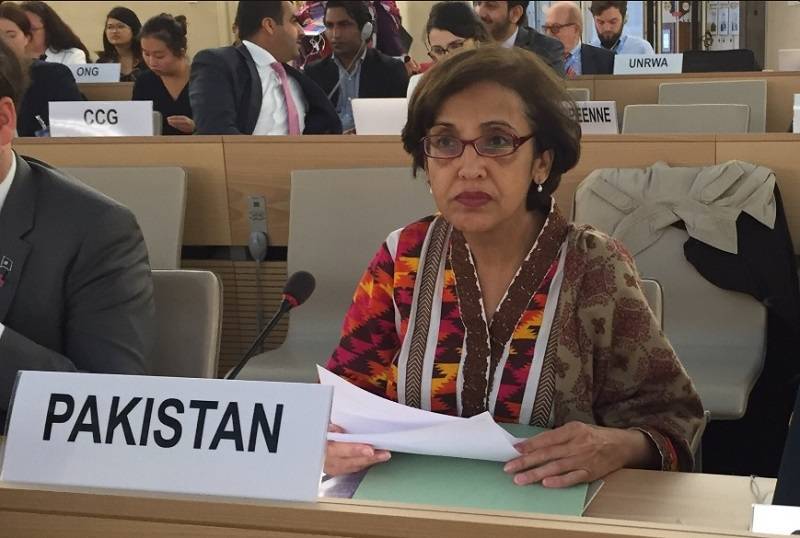 UNITED NATIONS - A senior Pakistani diplomat has underscored the imperative need for resolving the decades-old dispute between Pakistan and India in an bid to promote peace and stability in South Asia.

“South Asia’s security environment is blighted by one power’s insistence on hegemonic policies, engaging in a relentless arms build-up, and a myopic refusal to engage in any meaningful dialogue on security issues,” Ambassador Tehmina Janjua, who is Pakistan’s permanent representative to the United Nations in Geneva, told the General Assembly’s First committee, which deals with disarmament and international security matters.

In 1974, she said Pakistan’s security was challenged when India exploded a nuclear weapon. Left with no option, Pakistan had to follow suit to restore strategic stability in the region and deter all forms of aggression.

At the same time, Ambassador Janjua said Pakistan made a number of proposals for keeping South Asia free of nuclear weapons and missiles such as the simultaneous application of IAEA safeguards on all nuclear facilities and bilateral arrangement for their reciprocal inspections.

Other proposals included simultaneous accession to the Nulcear Non-Proliferation Treaty (NPT); regional Test Ban Treaty; Zero Missile Regime in South Asia; and the signing of a Non-Aggression Pact. “None of these proposals met a favourable response,” she said.

Referring to last month’s address of Prime Minister Muhammad Nawaz Sharif to the UN General Assembly in which he expressed Pakistan’s readiness to agree on a bilateral arrangement between Pakistan and India on a nuclear test ban, Ambassador Janjua said, “We are awaiting a response to that proposal.”

“Peace and stability in South Asia cannot be achieved without resolving underlying disputes especially the Jammu and Kashmir dispute; agreeing on measures for nuclear and missile restraint, and instituting conventional forces balance,” she told delegates.

“Our proposal for a strategic restraint regime, based on these three inter-locking elements, remains on the table. We have demonstrated our commitment to peace and stability in the region.

“Our conduct continues to be defined by restraint and responsibility, and avoidance of an arms race.”

After failing to develop consensus on an equitable and non-discriminatory fissile material cut-off treaty in the Conference on Disarmament (CD), attempts continued to be made to move the issue outside the Conference.

Pakistan, she said, would not accept recommendations by the ill-advised Group of Governmental Experts on the Treaty, and substantive work on that matter must be undertaken in the Conference.

“Through a series of actions in diverse areas, we have demonstrated our credentials and eligibility to join the Nuclear Suppliers Group (NSG), Ambassador Janjua said.

“We expect that a non-discriminatory, criteria-based approach is followed for expanding NSGs membership, which would strengthen the non-proliferation regime in an equitable and credible manner.”

The Pakistan envoy called for addressing regional security issues through dialogue and diplomacy, including establishing a strategic restraint regime in South Asia. The safe, secure and peaceful use of nuclear energy, without discrimination, was essential for economic development, she stressed, and Pakistan met the international standards to gain full access to civil nuclear technology for meeting its growing energy needs for continued economic growth.

Siddhartha Nath, an Indian delegate, exercising the right of reply, said it was a matter of record that Pakistan was responsible for blocking progress in the Conference on Disarmament.

Pakistan’s delegate Yasar Ammar, exercising the right of reply, questioned why India had not responded to his Governments proposals for a bilateral nuclear test ban arrangement between the two countries.

Also, he said India had joined the Convention on the Prohibition of the Development, Production, Stockpiling and Use of Chemical Weapons and on Their Destruction as a chemical weapon possessor State and had conducted a second nuclear test in 1998 after concluding the Test-Ban Treaty.

India was also continuously enhancing its offensive abilities, including the introduction of nuclear submarines. Those actions had compelled Pakistan to take appropriate measures to deter all forms of aggression.

The Indian delegate, taking the floor a second time, claimed that the biggest threat to peace and stability came from the active promotion of terrorism and the unbridled development of fissile material by State and non-State actors. Persistent violations that had increased nuclear and proliferation threats clearly were linked to Pakistans activities, he alleged.

The Pakistani delegate, taking the floor a second time, said Indias delegate had chosen to distract the international community from its own actions. He called for India to respond to his Prime Ministers proposal for a bilateral arrangement on a nuclear test ban between the two countries.