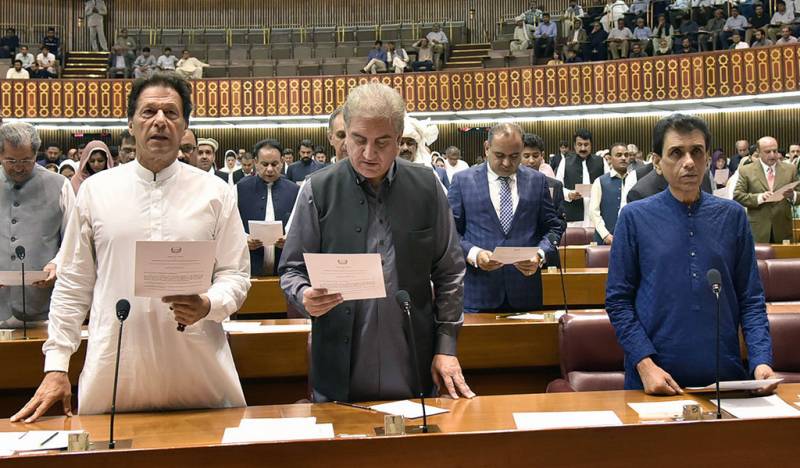 KARACHI – Federal Minister for Information Technology and Telecommunication Khalid Maqbool Siddiqui has stepped down from Federal Cabinet as the Imran Khan government "failed to keep its promises".

"We had promised the government that we would help in forming the government and we have fulfilled the promise. However, none of our promises were fulfilled,” said Siddiqui, who was flanked by other Muttahida Quami Movement- Pakistan (MQM-P) party leaders, at a presser in Karachi on Sunday.

Less than two weeks ago, Pakistan Peoples Party chairman Bilawal Bhutto-Zardari had publicly offered the Muttahida Qaumi Movement-Pakistan partnership in the Sindh government provided the latter quit the Pakistan Tehreek-i-Insaf-led coalition government — a move the MQM-P did not reject outright, but described it as a “non-serious attempt”.

Bilawal surprised everyone when he while speaking at a programme to inaugurate four development projects in Karachi addressed Karachi Mayor Wasim Akhtar, who is also a central leader of the MQM-P, and offered him PPP’s full support if the MQM-P broke off its alliance with the PTI to oust the federal government.

“Bring down, bring down...bring Imran’s government down and save Karachi,” he said.

Amid loud cheering from the audience, he continued: “We will support you one hundred per cent. For the sake of the people of Karachi, we are ready to provide an equal number of ministries [in Sindh] to the MQM but the [only] condition is that it sends Imran packing.”

MQM is one of PTI's allies in the federal government and its MNAs Farogh Naseem and Khalid Maqbool Siddiqui (previously) hold the federal ministries for law and information technology, respectively.