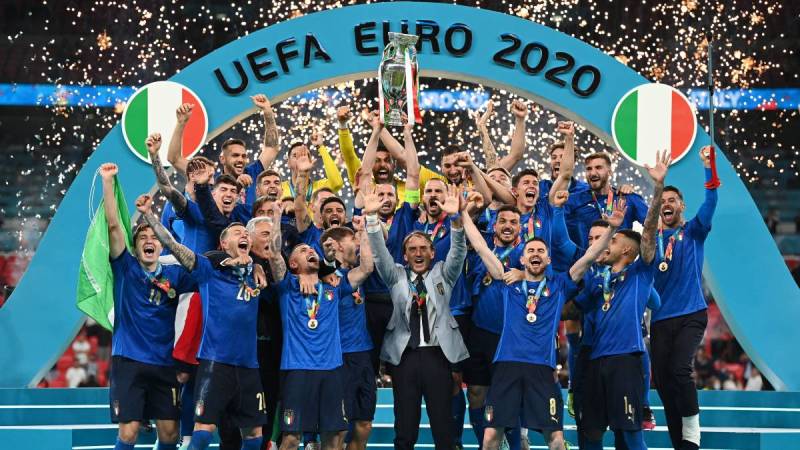 LONDON – Italy for another time lifted the European Championship trophy after defeating England 3-2 in a penalty shoot-out in the final at Wembley Stadium.

England and Italy went to a penalty shoot-out in the final following a 1-1 draw after extra time.  Marcus Rashford, Jadon Sancho, and Bukayo Saka missed for the Three Lions as Italy goalkeeper Gianluigi Donnarumma saved two penalties in a row to take his team to the title.

Italy beat hosts by 3-2 on penalties to win the Euro 2020 final. Luke Shaw scored inside two minutes, the fastest ever goal in a European Championship final, but Italy’s Bonucci bundled in an equalizer at a corner midway through the second half.

Soon after the setback for England, disgruntled fans reacted in a brutal manner while cops detained around 50 to control the unrest. At least 19 officers were reportedly injured while they confronted volatile crowds.

Italy proved to be the better side and proved themselves as the best team of the entire tournament. They had beaten favorites Belgium, Spain, and a young England side.

The triumph is the first major international trophy since the 2006 FIFA World Cup win for Italy as they reached the final in Euro 2000 and Euro 2012 but had lost to France, and Spain, respectively. They have won the second European Championship after more than 5 decades.

ISLAMABAD – Federal Minister Asad Umar was all praise for Argentine star footballer Lionel Messi as he won his ...