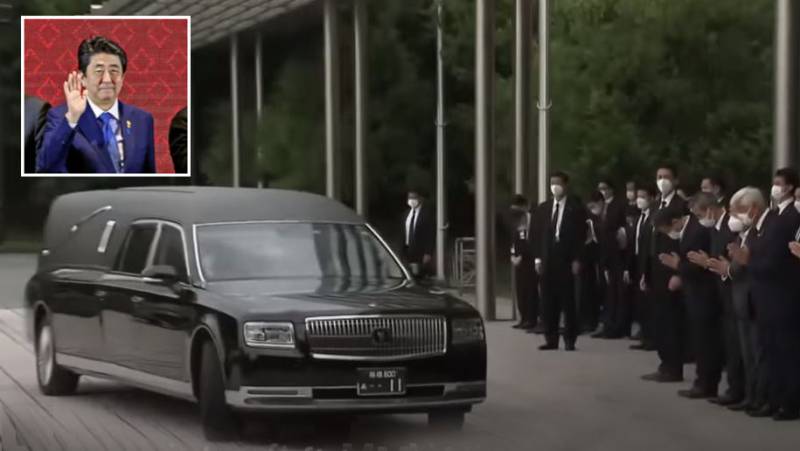 TOKYO – Japan's longest-serving premier Shinzo Abe laid to rest today in a private funeral in the capital Tokyo, days after Liberal Democratic Party was gunned down.

A large number of residents of East Asian country bid their final goodbye to Shinzo Abe on Tuesday as a family funeral was held at Zojoji temple in downtown Tokyo.

Teary-eyed funeral-goers paid respect as a motorcade carried his body which was accompanied by his widow, Akie Abe.

The funeral coach then traveled past the headquarters of Abe's office before making its way to the PM’s residence, where the Japanese premiere received the motorcade along with other lawmakers.

Hearse with Shinzo Abe's body passes Japan's parliament: The hearse carrying the body of Shinzo Abe is passes by the parliament building in Tokyo as Japan mourns the former prime minister who was shot at close range in the city of Nara pic.twitter.com/ERkOa9pXyn

The widow of 67-year-old, close family members, Japan’s incumbent PM Fumio Kishida, and senior party leaders, attended the funeral at the temple. Meanwhile, flags flew at half-mast and outside the temple following the huge loss.

Last week, Shinzo Abe was shot dead when he was delivering a speech during a campaign in the Nara region. Abe was rushed to the hospital in unconscious condition with bullet wounds earlier in the day but he could not survive.

A public broadcaster NHP reported that the sound of a gunshot was heard following which Abe collapsed unconscious.

TOKYO – Former Japanese prime minister Shinzo Abe was shot dead when he was delivering a speech during a campaign ...

Video clips circulating on social media show the former premier rushed to hospital as he was bleeding from his neck after being hit by a gunman who was nabbed.