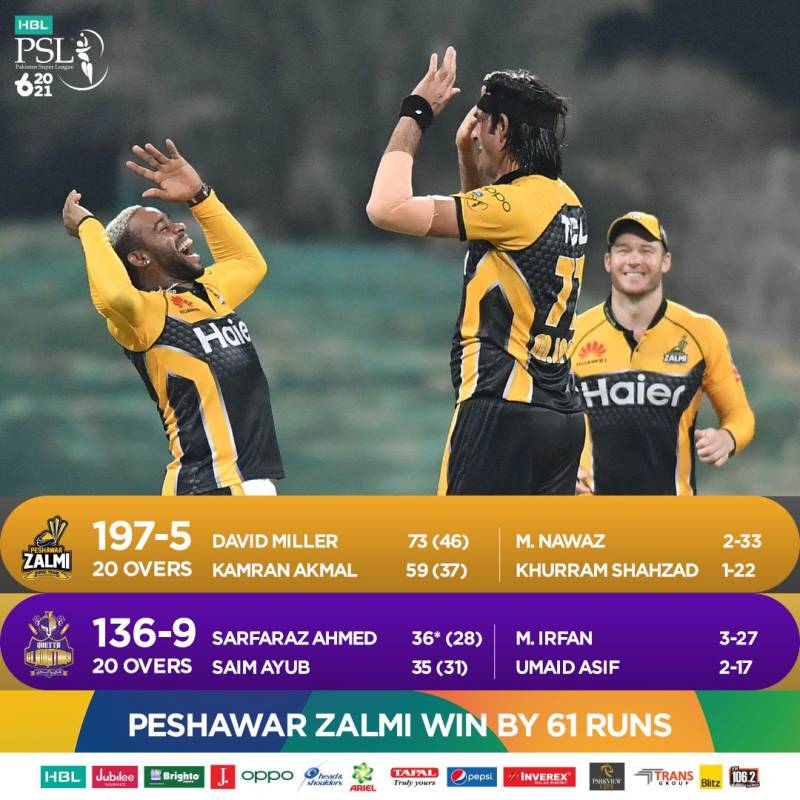 Mohammad Irfan’s triple strike and Umaid Asif’s double blow helped Peshawar Zalmi register a massive 61-run win against Quetta Gladiators. Before that, fifties by David Miller (73) and Kamran Akmal (59) propelled Peshawar Zalmi to a massive total of 197/5 in 20 overs. Rovman Powell also played a blinder of knock – 43 not out off 19 balls.

From Quetta Gladiators’ side, opener Saim Ayub (35) and Usman Khan (28) gave the side a steady start, but as soon as they were dismissed, the Gladiators' wickets started tumbling in quick succession.

Fabian Allen provided the first breakthrough to Zalmi by dismissing Usman, while Mohammad Irfan took the wickets of Ayub, Azam Khan (0) and Cameron Delport (0) in a single over.

Following Irfan, pacer Umaid Asif dismissed Jake Weatherald for 13 and Mohammad Nawaz for a duck. Later, through a direct hit, Asif got Khurram Shahzad run out at 11.

In the 18th over, Zalmi skipper Wahab Riaz got the wickets of Mohammad Hasnain (0) and Zahid Mahmood (0).

Gladiators' skipper Sarfaraz Ahmed was able to score 36 not out.

The latest victory took Peshawar Zalmi to 3rd spot on the points table, while Quetta Gladiators fell to the bottom of the points table after yet another humiliating defeat.

Both teams were under pressure as Wahab Riaz-led Zalmi faced a setback in first match of the second leg while playing against Lahore Qalandars.

However, pressure on Quetta Gladiators was greater as the former champions, who are at the bottom of the point table, could face elimination if defeated.

ABU DHABI – A first five-wicket haul in franchise T20 cricket for Rashid Khan after Tim David's 64 not out saw ...