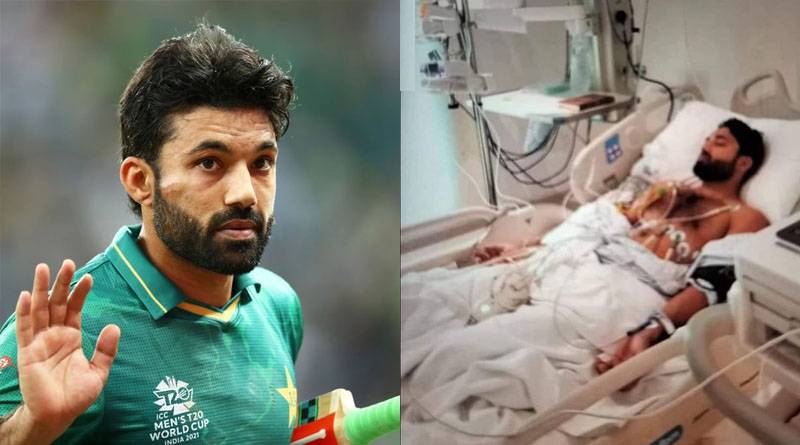 DUBAI – Pakistan’s opening batsman Mohammad Rizwan won many hearts – despite Shaheen's loss in the semifinal – after his picture from an intensive care unit went viral.

Rizwan, who has been titled 'Hero', scored 67 to guide Green Shirts to 176/4 in the second semi-final against Aussies on Thursday.

Following the five-wicket loss, it was revealed that the star batsman developed a chest infection on Tuesday and spent two nights in an ICU bed in Dubai.

Pakistan's team doctor Najeebullah Soomro revealed that Rizwan developed a severe chest infection after which he was admitted to a medical facility. The 29-year-old made an incredible recovery and was allowed to play the crucial match.

Soomro also revealed that Rizwan's illness was kept secret not to damage the team's morale ahead of the much-anticipated encounter.

Batting coach Matthew Hayden also commended Rizwan and termed him a ' warrior'. This is a warrior, he's been brilliant through the campaign and he's got great courage, he added.

Skipper Babar Azam also hailed the exceptional attitude of his opening partner. “The way he played today, it was exceptional”, Babar said.

Furthermore, Pakistan's former pacer Shoaib Akhtar "Can you imagine this guy played for his country today and gave his best. He was in the hospital the last two days," he added.

Can you imagine this guy played for his country today & gave his best.
He was in the hospital last two days.
Massive respect @iMRizwanPak .
Hero. pic.twitter.com/kdpYukcm5I

Check some of the other reactions:

Mohammad Rizwan in hospital the night before the match against Australia. He had developed a severe chest infection and spent 2 nights in the ICU #T20WorldCup #PAKvAUS pic.twitter.com/E7qbcxdJmg

This is incredible!!
"Mohammad Rizwan @iMRizwanPak developed a severe chest infection on 9th November after which he was admitted to hospital & spent 2 nights in the ICU. He made an incredible recovery to be fit for the match" Pak team Doctor pic.twitter.com/qMDZ9vMWjs