Youm-e-Ashur being observed amid strict security 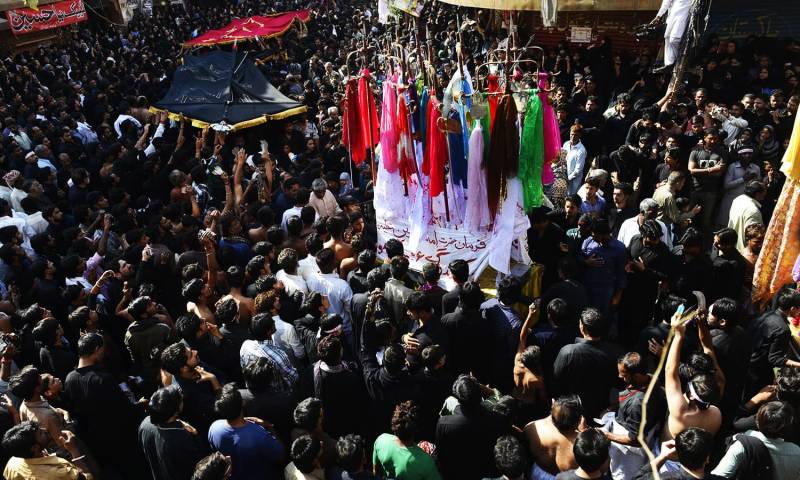 LAHORE – To pay homage to the sacrifices of Hazrat Imam Hussain (RA) and his companions in Karbala, Yaum-e-Ashur is being observed today (Wednesday) with solemnity and sanctity across the country.

Alam, Zuljinah and Taazia processions are being taken out in all  small and big towns in Punjab, Balochistan, Sindh, Khyber Pakhtunkhwa, Gilgit-Baltistan and Azad Kashmir.

The Ulema and Zakireen are highlighting the teachings of Hazrat Imam Hussain and various aspects of Karbla tragedy which took place some 1,400 years ago.

Volunteers and scouts are also performing duties on the occasion.

The federal and provincial governments have announced public holiday for Muharram 10.  All public and semi-government institutions are closed.

President Mamnoon Hussain and Prime Minister Nawaz Sharif in their separate messages on the occasion have called for forging unity among Muslims in the light of the teachings of Hazrat Imam Hussain (RA) to effectively tackle the challenges facing the Ummah.

The President said only way to face these challenges is that the Ummah follows the teachings of Quran and does not indulge in discord.

Mamnoon Hussain said while remembering the sacrifices of Hazrat Imam Hussain (R.A) and his companions we should keep in mind the fact that their struggle was only meant for Allah's will.

In his message, Prime Minister Nawaz Sharif said on this day, we will have to shun our sectarian, ethnic and provincial differences, inculcating equality, harmony, discipline and the traits of sacrifice in ourselves.

He said Hazrat Imam Hussain (RA) gave the world a lesson that freedom is a fundamental right in accordance with the true spirit of Islam.

"One the important objectives of that great sacrifice [of Hazrat Imam Hussain (RA)] was to save the Muslims from divide and uniting them. Today, we, in the light of that great sacrifice, can also tackle the threats of extremism and external aggression," the President said in his message on the occasion of Yaum-e-Ashur.