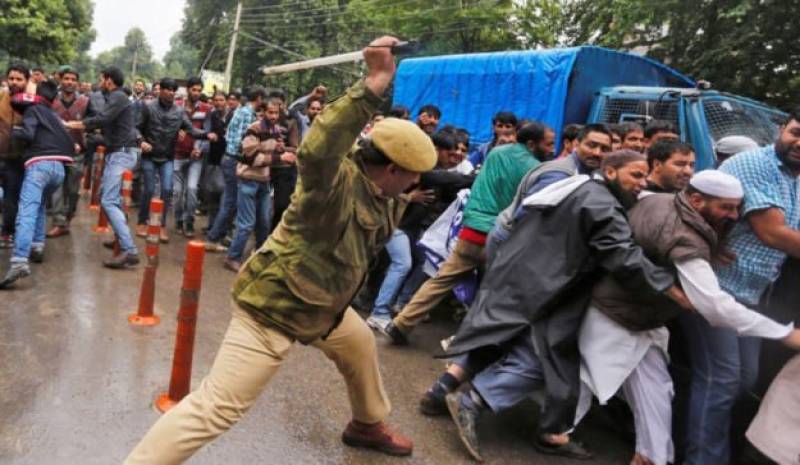 Giving detail of the Indian atrocities, compiled in the 131-paged dossier, Qureshi said the Hindutva-inspired BJP regime in India has unleashed a series of atrocities against the people in occupied territory.

Qureshi said that communication blockade in IIOJK continues by design to hamper international media and observers from reporting the heinous crimes being committed by the Indian occupation forces.

He said the dossier contains three chapters and first one carries detail of war crimes and genocidal acts of the Indian troops; the second one exposes false flag operations in IIOJK to suppress the indigenous freedom movement while the last chapter tells that how human rights law are being openly being violated by India.

Recalling Syed Ali Geelani's funeral, Qureshi added that his own family members were not allowed to attend the funeral and were instead tortured and Geelani's body forcibly buried.

He further said that independent observers are not allowed within occupied Kashmir and the realities from Kashmir are distorted.

Qureshi proclaimed that the Indian atrocities will be exposed in the dossier as it contains solid evidence of "fake encounters" and India's tactic of framing Kashmiri freedom fighters as "terrorists".

Qureshi also talked about the Kashmir Reorganisation Bill 2019 which merged Jammu and Kashmir within the Indian Union, removing its autonomy.

He further told the media that since 2014, India has conducted 15,495 sieges and search operations in occupied Kashmir.

Speaking on Indian laws in Kashmir, Qureshi said that India has six draconian laws which can declare any Kashmiri a terrorist.

Accusing India of terrorist activities, Qureshi said India is training five Daesh camps, which is a matter of concern.

Detailing the atrocities committed by India, the Foreign Office showed multiple examples of "fake encounters", it was reported that at least 13,000 Kashmiri children have been detained by India.