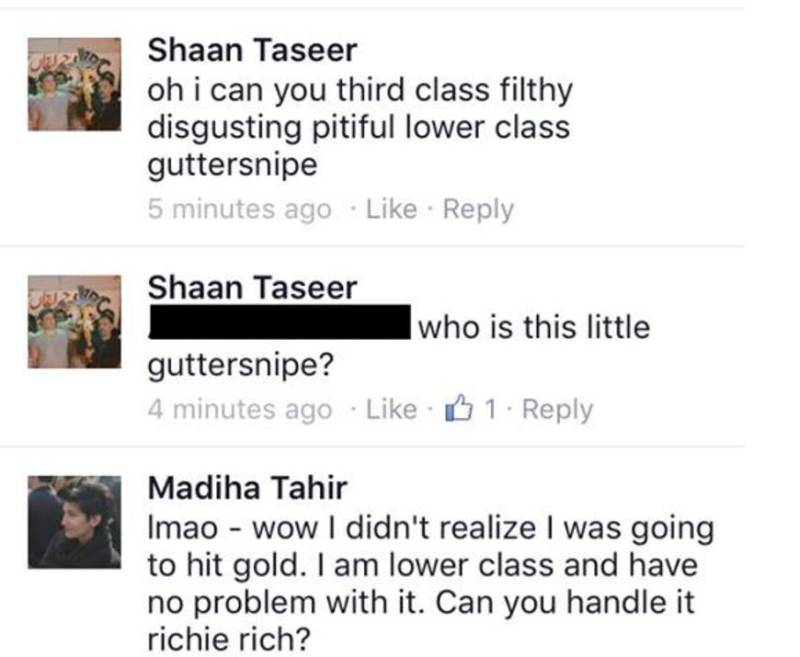 LAHORE (Staff Report) - Last week, a group of students at Beaconhouse National University covered campus walls with sanitary pads to protest against the stigmatisation of menstruation. But their act has unexpectedly triggered a new debate focused on the question "does this denouncing behaviour even exist in Pakistani society?"

And in the meanwhile another argument which took place between Shaan Taseer, the son of former Punjab Governor Salman Taseer, and a facebook user has exposed the mind set of "Richie Rich" Shaan Taseer.

This started when Shaan Taseer posted a facebook status about the BNU students' protest story, saying "English speaking university going women of the Lahore bourgeois have been oppressed by who exactly?" He continued with another question "by not celebrating their periods and making them feel special enough?"

When Taseer came up with a manner as "he dishes it out" usually, and further raised more questionable questions "Who made these women feel shameful?" and "the shopkeeper at Alfatah [a famous shopping store]?"

further using words unbeknownst, inbred and bourgeois for the Pakistani women who use sanitary pads during their periods.

Then came a twist in the debate

and mention of stolen wages of Daily Times' [one of the newspapers owned by Taseer Family] workers  offended the excruciatingly privileged Shaan Taseer.

And he lost his cool,

calling the female facebook user a stupid bitch. "I am sorry you had to be born to the gutters," he added.

And then he told Madiha Tahir that she is third class filthy disgusting pitiful guttersnipe.

Ms Tahir later wrote a facebook post saying "I think Taseer's behavior is no better and no worse than your other garden variety disgustingly rich person. This is what wealth does: make fragile egos who are so used to having their way in the world that they cannot fathom anyone responding to them with the same disdain they dish out to everyone else."

And finally here are details of the feminist protest at BNU: