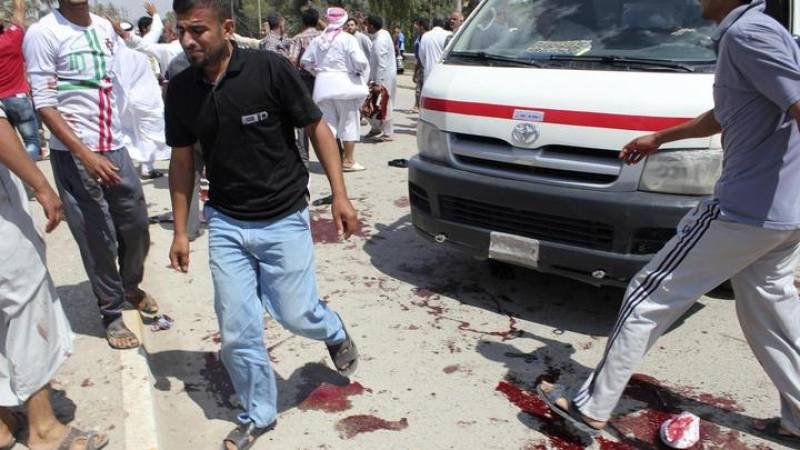 BAGHDAD (Web Desk) - At least 76 people were killed and 212 wounded on Thursday in a blast claimed by Islamic State in Baghdad, police and medical sources said, one of the biggest attacks on the capital since Haider al-Abadi became prime minister a year ago.

The blast tore through the crowded Jameela market in the predominantly Shia district of Sadr City. 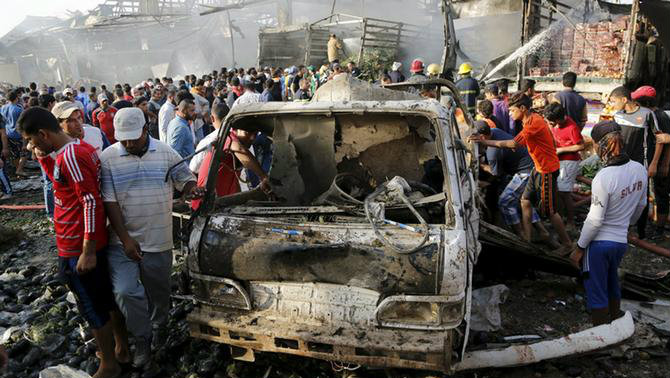 "A refrigerator truck packed with explosives blew up inside Jamila market at around 6 am (0300 GMT)," police officer Muhsin al-Saedi said. "Many people were killed and body parts were thrown on top of nearby buildings." 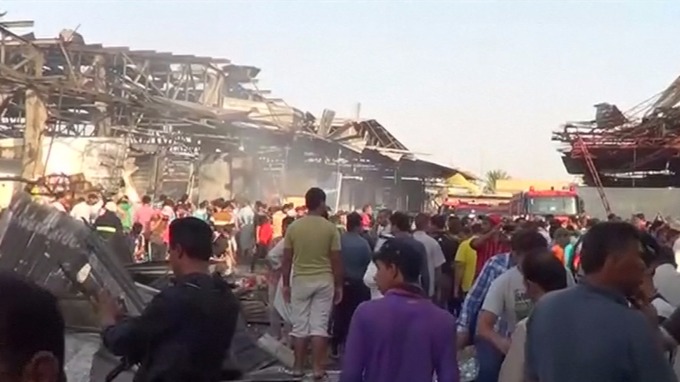 A statement circulated online by supporters of Islamic State said the blast had targeted what it called a stronghold of the "charlatan army" and Shia Muslim militias.

The market in the Shia neighborhood is one of the biggest in Baghdad selling wholesale food items. A witness at the site saw fruit and vegetables mixed with shrapnel littering the blood-soaked blast crater. 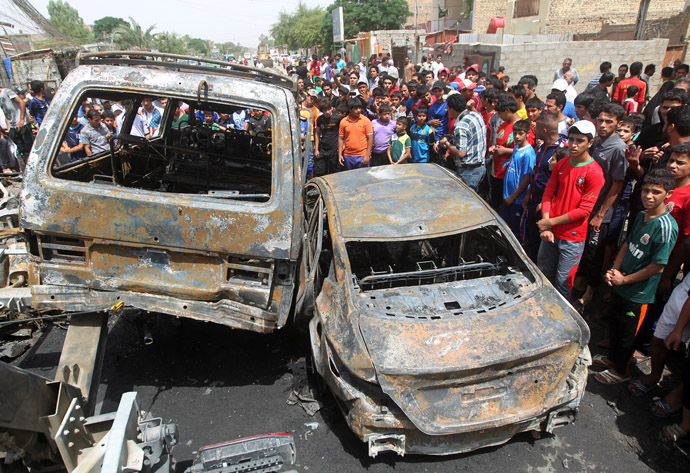 It came after a top US general said it should consider embedding American troops with Iraqi forces if progress was not made in the fight against IS.

Raymond Odierno, the army's outgoing chief of staff, told reporters that such forces would have a support rather than a combat role.

The US has already sent some 3,500 military trainers and advisers to Iraq.

In a statement posted on Twitter, IS said the truck bomb targeted Shia militiamen from the Mahdi Army and the Popular Mobilisation forces, who have been battling the jihadist group in northern and western Iraq for more than a year, the BBC reported.

Sadr City has been the target of several bomb attacks this year claimed by IS militants, who consider Shia to be heretics.

Dozens of people have been killed in bombings across Baghdad in recent months. In May and July, large car bombs exploded outside two prominent hotels. 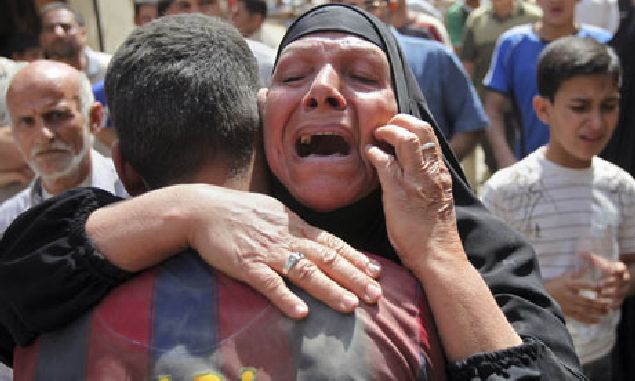 IS also continues to control vast swathes of territory in northern and western Iraq, but air strikes by a US-led coalition have helped Iraqi pro-government forces regain some territory since last August.

But the Americans' aim of training 24,000 Iraqi troops has fallen short, with only 9,000 coming forward, according to US Defence Secretary Ashton Carter.

"We hold the government responsible, fully responsible," witness Ahmed Ali Ahmed said, calling on the authorities to dispatch the army and Shia militias to man checkpoints in the capital. 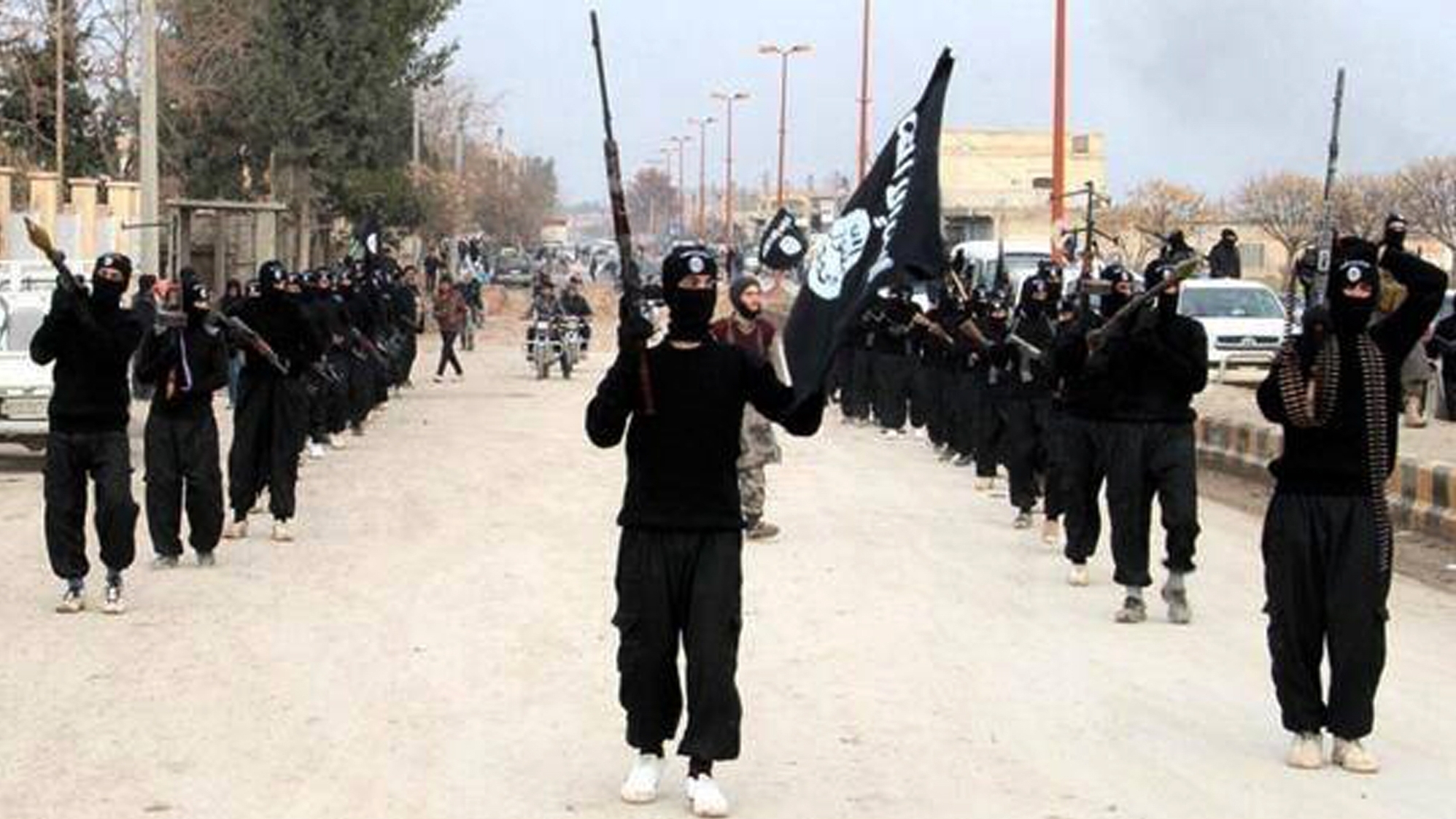 Abadi took office last summer following the army's collapse in the face of Islamic State's takeover of the northern city of Mosul that left the Baghdad government dependent on militias, many funded and assisted by neighboring Iran, to defend the capital and recapture lost ground.

Security forces and militia groups are fighting Islamic State in Anbar province in western Iraq. In Baghdad, Abadi has proposed sweeping reforms aimed at reducing corruption and patronage, the biggest changes to the political system since the end of US military occupation.