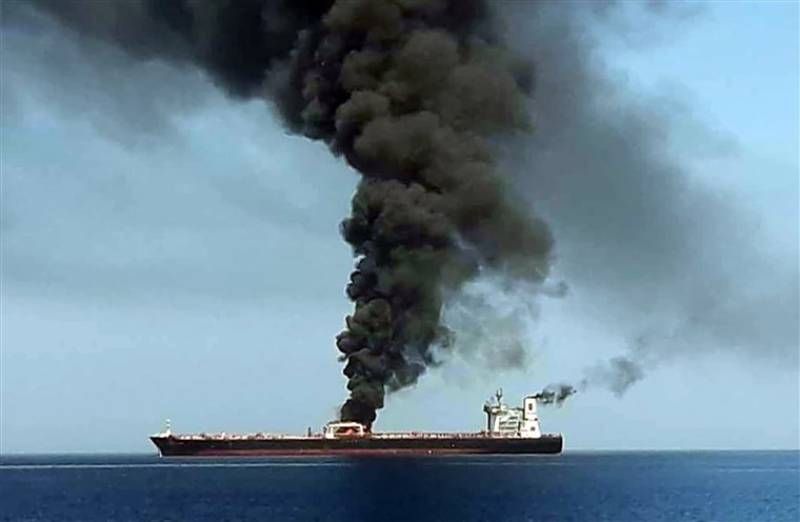 The mystery incident, the second involving shipping in the strategic sea lane in only a few weeks, came amid spiralling tensions between Tehran and Washington, which has pointed the finger at Iran over earlier tanker attacks in May.

The Norwegian Maritime Authority said three explosions were Thursday reported on board the Norwegian-owned tanker Front Altair after it was "attacked" along with the Singapore-owned ship Kokuka Courageous.

Iran said its navy had rescued 44 crew members after the two vessels, which were carrying highly inflammable material, caught fire.

TV images showed huge, thick plumes of smoke and fire billowing from one of the tankers as it lay out to sea. Iranian Foreign Minister Mohammad Javad Zarif spoke of "reported attacks" as Japan's prime minister held talks in Tehran.

The US Fifth Fleet said its warships had received distress calls from both vessels in a "reported attack".

Iranian state media said the first incident occurred on board the Front Altair at 8:50 am (0420 GMT) 25 nautical miles off Bandar-e-Jask in southern Iran.

The Marshall Islands-flagged tanker, a 111,000-tonne vessel, was carrying a cargo of ethanol from Qatar to Taiwan, official news agency IRNA reported.

"As the ship caught fire, 23 of the crew jumped into the water and were saved by a passing ship and handed over to the Iranian rescue unit," it said.

"An hour after the first accident the second ship caught fire at 9:50 am 28 nautical miles off the port."

"I can confirm that the vessel has NOT sunk," Robert Hvide Macleo, chief executive for the ship's owner Frontline, wrote in a text message to AFP. No injuries were reported.

The Panama-flagged Kokuka Courageous was headed to Singapore from Saudi Arabia with a cargo of methanol, and 21 of its crew jumped and were rescued, IRNA said.

World oil prices surged Thursday on reports that two tankers had been attacked in the Gulf of Oman, worsening frayed tensions in the crude-rich Middle East region, analysts said.

The surge in oil prices boosted share prices of energy companies, while global stock markets won support also from the prospect of US interest rate cuts this year.

Rising hopes of a rate cut helped to offset lingering tensions over the long-running trade war between Washington and Beijing.

The Gulf of Oman lies at the other end of the strategic Strait of Hormuz from the Gulf, part of a vital shipping lane through which at least 15 million barrels of crude oil and hundreds of millions of dollars of non-oil imports pass.

According to Iranian state media, one of the tankers -- the Norwegian-owned Front Altair -- was carrying ethanol from Qatar to Taiwan, while the Kokuka Courageous was carrying methanol from Saudi Arabia to Singapore.