This Pakistani tea-maker is now selling Abhinandan inspired hot drink, but why? 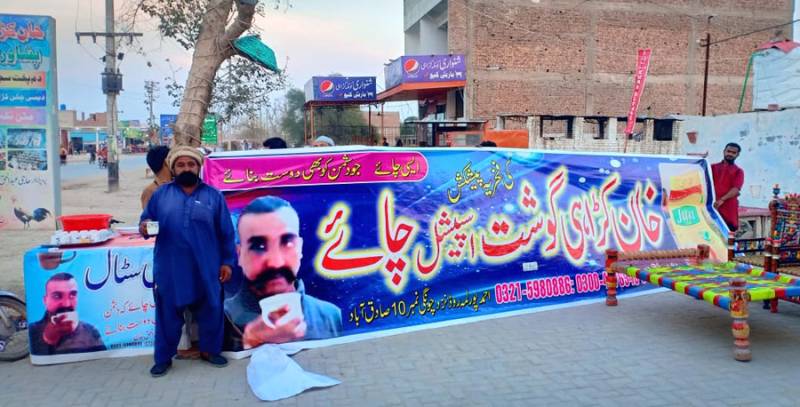 KARACHI - Post Pulwama incident the tensions between Pakistan and India kept on arising with every day passing by. Indian Airforce had also violated Pakistan’s airspace a few days ago, sending its failed fighter pilots over the LoC on a killing spree in the dark of the night.

But still, even after Indian violations, the Pakistanis have proven that they are a friendly nation who will treat even their enemy with open arms.

The incident of Feb 27 is very fresh in everyone's memory as it was the day when the IAF pilot Abhinandan was captured by the armed forces in broad daylight, after the PAF squadron leader Hasan Siddiqui shot down the enemy jet, infiltrating the sovereign nation of 204.73 million.

The captured pilot Abhinandan was treated with warmth and was well looked after, despite him being sent on a targeted mission to spill innocent blood, just to feed the fire of an upcoming election.

His video clip went viral after the capture and before crossing over to the Indian side had won many hearts. Post-Abhninandan's viral video, A tea seller in Karachi came up with an interesting marketing strategy and  It stems from the video when Abhinandan after his capture took a sip of the tea offered and appreciated its taste.

LAHORE - Pakistan handed over an Indian pilot, who was captured by Pakistani troops inside Azada Jammu and Kashmir, to ...

The tea stall set up by Haji Abdulhaq Khan had an amazing caption, narrating that we sell such a tea that even the enemy turns into our friend.

The tagline reads as “Aesi chai k dushman ko bhi dost banaye (The tea that turns an enemy into a friend)”.

Twitterati are also sharing the pictures of the IAF pilot Abhinandan's inspired tea stall in their posts:

This Pakistani uncle has got some serious marketing skills. The small roadside tea stall has a banner with the following text: 'Khan's Tea Stall - A tea that makes foes turn into friends' with the image of Indian Air Force pilot #Abhinandan - #IAF pic.twitter.com/ldQVG6brI7

“I never knew the power of tea until I saw a cup in the hands of Indian pilot Abhinandan Varthaman singing praises of the Pakistan Army,” Abdul Haq Khan told @arabnewspk from his new tea stall in #RahimYarKhan #Pakistan. #Indiahttps://t.co/eHnoqD49eH pic.twitter.com/FhRXvj5jXs

Entrepreneurs!! Start a coffee shop or tea stall with the name “Mug 21“. N grow mustache like Abhinandan. It going to be an instant hit. Trust me. Thank me later.