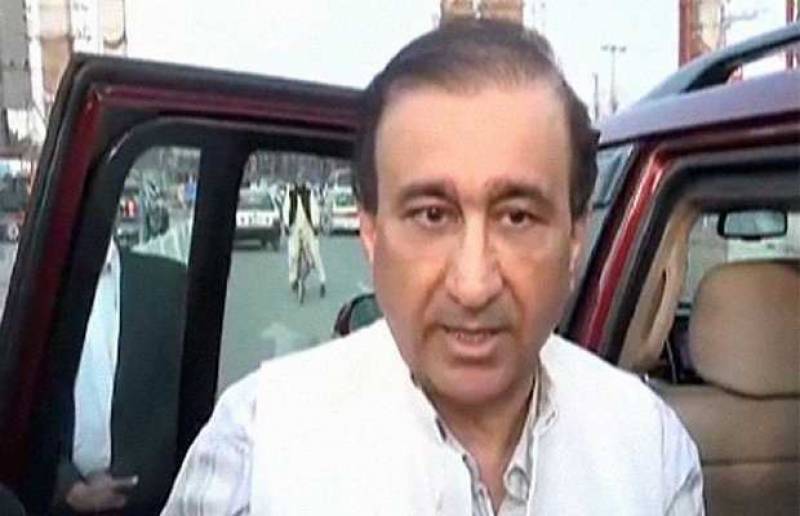 ISLAMABAD - The National Accountability Bureau (NAB) has issued details of the land illegally allotted to Jang Editor-in-Chief Mir Shakil-ur-Rehman in 1986 by the then Punjab Chief Minister Muhammad Nawaz Sharif by relaxing the relevant rules.

The development comes after the NAB arrested the media tycoon when he appeared before the probe team to submit replies.

Illegal allotment of land to Mir Shakil-ur-Rehman had started in 1986, "which got transferred in his [Mir Shakil] favour in 2016 under the regime of Sharif's in relaxation of rules," a NAB press release said.

LAHORE - NAB has arrested Chief Executive Officer of the Geo/Jang Group Mir Shakilur Rahman in Lahore by the National ...

Sharing the brief facts of the illegal allotment, the anti-corruption watchdog said Hidayat Ali and others had submitted an application through Mir Shakil, holding General Power of Attorney (GPA) for interim development of their land of 180 Kanal and 18 Marlas, on June 4, 1986.

Lahore Development Authority (LDA) Director Land Development (DLD) Mian Bashir Ahmad worked out a summary report which was later submitted to the then Chief Minister Nawaz Sharif on June 7, 1986, informing that the land had already been acquired by the authority for the development of Jauhar Town Scheme, Phase-II.

On July 03, 1986, the then LDA Director General submitted the summary report to the chief minister which was approved by him on July 11 of the same year.

According the copy of summary available with APP, the DLD pointed out that since LDA had already acquired the land, therefore, permission for interim development could not be granted. However, the applicants could be offered for the exemption of their land to the extent of 30 per cent developed plots as admissible under the Housing Act, 1973 and Exemption Policy to Jauhar Town.

As per the above formula, their total entitlement of 180 Kanals and 18 Marlas was adjusted with 55 Kanals and 5 Marlas in the Town.

The DLD noted that the applicant had met him and desired that he might be exempted 30 per cent of his land on the Canal Bank because his holding was situated at an equally good location which was near the proposed civic center.

He then proposed that the applicant might be exempted 54 one-kanal plots in single block, including nine plots facing Canal Bank having 360' front.

"This proposal may be treated as a special case, not to be quoted as a precedent," the then CM was quoted as directing the LDA in the summary.

NAB said usually in government housing schemes, plots were allotted through transparent balloting, but in that case "No balloting process had been adopted." "If balloting process were followed, then 55 plots (one Kanal each) should have been allotted to the allotees," said the Bureau.

Meanwhile, on October 02, 1986, above mentioned plots were transferred to Shahina Shakil, Mir Muhammad Ibrahim, Ayesha Shakil, Asma Shakil and Ismail Shakil from Hidayat Ali and others through the GPA holder Mir Shakilur Rahman.

Those plots were transferred back to Mir Shakilur Rehman by Mrs Shahina Shakil and others on December 1, 1998.

NAB said two civil suits had been filed against the allotments which were dismissed by the lower courts in Lahore.

Moreover, the LDA also received two complaints from the individuals who claimed that they were the owners of land in Khasra numbers of H Block.

Both of the complaints were also dismissed by the LDA at that time. Some 10 Marlas land were reduced in the decision given by the EDOR.

The Johar Town Housing Scheme was established in 1981.