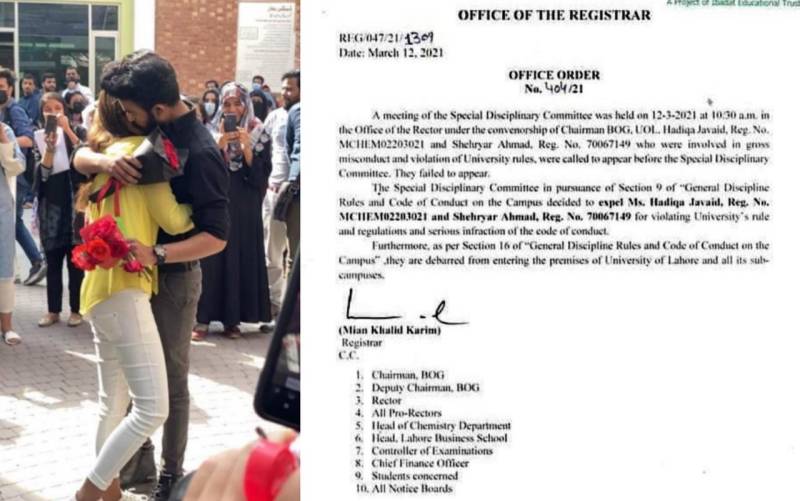 The hottest topic nowadays that has left the internet debating is a viral video of a Pakistani student proposing to the boy within the university premises.

The videos show a young woman handing roses and cards to a young man and then bending down on one knee and holding out a bouquet of roses to him. He takes the roses and then pulls her in for a hug. A crowd of students surrounds the couple and cheers them on.

Spreading like wildfire, not only has the proposal sparked a public debate but the University of Lahore (UOL) administration also expelled both the students.

As the couple propelled to prominence within the meme community, the masses are curious to know how their story will unfold further.

Talking about the latest development, a clip has started doing rounds on the internet which is allegedly the video of the lovebirds on a date, before their expulsion.

Moreover, the institute has taken action against the duo as they have released an official notice where they have expelled both the students from the university. The major reason cited included the public display of affection alongside violation of the university's rules and regulations and failing to appear before the Special Disciplinary Committee.

The debate stands within the masses where a majority highly discourages such proposals, deeming the proposal disgraceful. Others believe that everything is fair in love and war and find the public display of affection empowering.