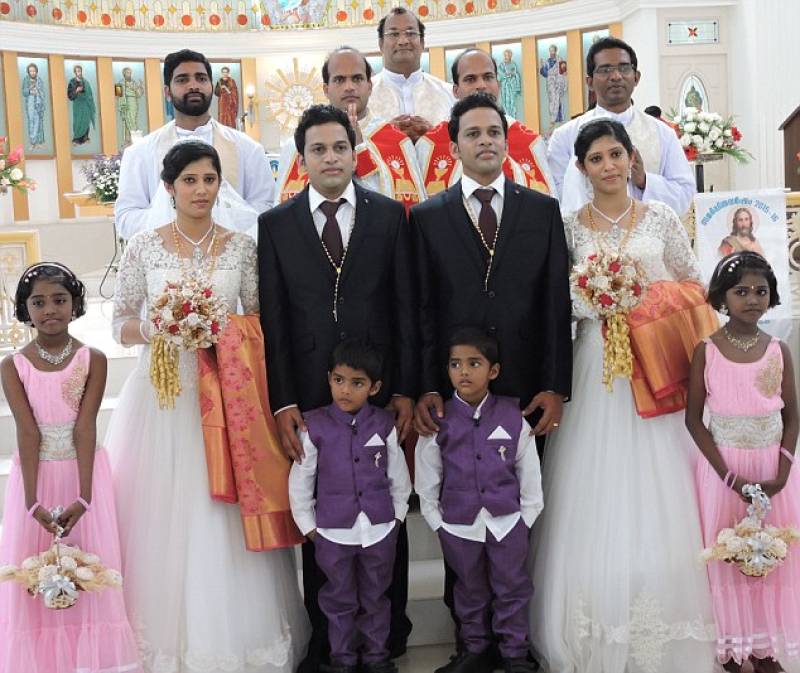 NEW DELHI (Web Desk) - In an awkward moment identical twin grooms, Dinker and Dilraaj, have tied knots with two identical sisters Reema and Reena in a ceremony which was also administered by twin priests in Thirusser area of Kerala state in India. According to Daily Mail, every thing at the marriage ceremony that took place on November 8 seemed to be quite similar because the flower girls, Ansa and Asna, and page boys, who maintain their identity as  Henri and Hendri, were also twins. Moreover the every twin couple also wore the same dresses and ornaments. The report further disclosed that Dinker and Dilraj, who even secured same marks in matriculation exam and joined the same profession and then one company, had planned to marry twin sisters as teens and finally they met their fate in the form of twin sisters who work as nurses through a matrimonial portal. Both girls also studies in the same school, college and got trained as nurses in the same institute and then finally they joined the same firm in Dubai to work. The twin grooms however expressed extreme disappointment over 'only' seven identical twin sets attending their marriage. They are very few, they maintained in an interview. The IT professionals have now established a Facebook group named "All Kerala Identical Twins" which has got 300 members so far.