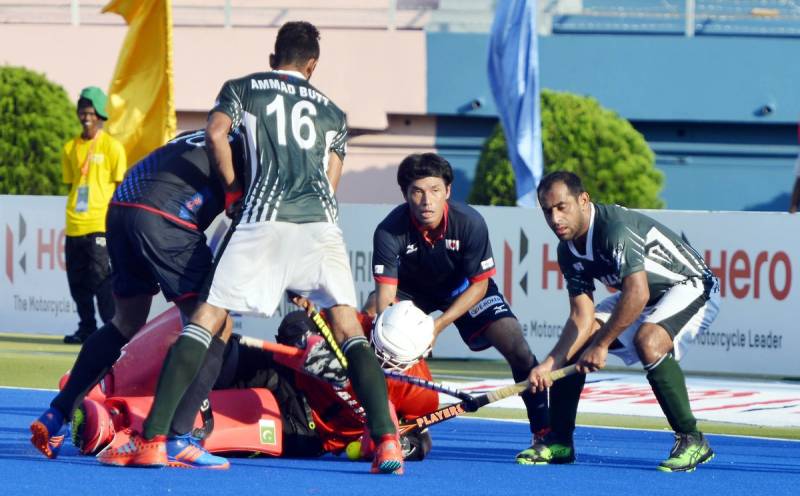 Earlier, Pakistan in their opening match had thrashed Bangladesh by 7-0.

Goals for Pakistan were scored by Mohammad Arslan Qadir (16’) and Mohammad Umar Bhutta (50’) while Kenta Tanaka (22’) and Heita Yoshihara (29’) scored for the Japanese.

The second quarter saw three goals being scored as Pakistan were awarded a penalty corner in the 16th minute which was well converted through some lovely team-work. Captain Mohammad Irfan flicked the ball fiercely towards Mohammad Arslan Qadir, who then deflected the ball towards the goal to give Pakistan the lead.

However, Japan made a comeback into the match as they produced two field goals to take a 2-1 lead going into half-time. First, it was Kenta Tanaka who scored Japan’s first goal of the match as he ran into the box with the ball, beat two defenders and shot at goal which was saved by Pakistan’s goalkeeper Mazhar Abbas, but Tanaka was quick to score off the rebound in the 22nd minute.

The second goal for Japan was scored by Heita Yoshihara who picked up the ball on the right flank, cut inside and sent the ball past Pakistan’s goalkeeper Mazhar Abbas into the back of the net in the 29th minute.

Japan showed good defensive skills in the third quarter to keep out Pakistan’s efforts of equalizing the score as the teams finished the third quarter with the score 2-1 in Japan’s favour. But it was the fourth quarter where Pakistan stepped up their attacking efforts as they looked to get the all-important equalizer.

With 10 minutes remaining on the clock, Pakistan’s Mohammad Arslan Qadir picked up the ball and dribbled past the Japanese defenders parallel to the base-line and passed the ball in front of the goal which was tapped in by Mohammad Umar Bhutta in the 50th minute to equalize the scores at 2-2.

Both the teams continued to put their opposition under pressure and put the defenders to test, however, neither team were able to make effective forays as the game ended in a 2-2 draw.-Agencies