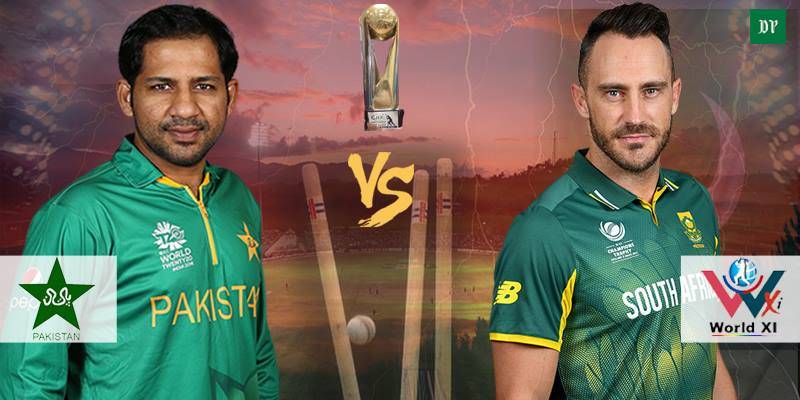 LAHORE - Thisara Perera smashed the winning six for a resurgent World XI side as they conquered the 175-run target with seven wickets to spare in the nail-biting second match of the Twenty20 International (T20I) Independence Cup series at Lahore's Gaddafi Stadium on Wednesday.

Opener Hashim Amla set the stage for a World XI win with a 72-run-strong performance studded by five 4s and two 6s, remaining not out at the end of the innings.

However, it was Perera's (47) five 6s that led the side to victory with one ball left in the game.

The star-studded international side fought tooth-and-nail to keep the series alive following their defeat to the green shirts last night.

Skipper Faf du Plessis was the last man out, off Mohammad Nawaz's bowling right after he hit a six. He scored 20 runs off 14 balls with two 6s under his belt. Tamim Iqbal was caught by Shoaib Malik off Sohail Khan, leaving the pitch with 23 runs.

Wicket-keeper Tim Paine was bowled by Imad Wasim for 10.

The World XI restricted Pakistan to a target of 174 runs for the loss of six wickets in the first innings, which was bolstered by two partnerships featuring Ahmed Shehzad paired up with Fakhar Zaman and then Babar Azam.

Babar, who was awarded man of the match in yesterday's game, today racked up 45-runs, becoming the highest scorer in the first innings.

Babar and Shehzad held the innings steady in the middle, racking up 59 runs between the two of them before Shehzad fell for 43.

Babar Azam was caught at 45 off Samuel Badree as his stand with Shoaib looked to threaten the World XI.

Shoaib Malik, the last man out in the innings, today became Pakistan's top T20I run-scorer with 1,702 runs in the format.

The green shirts lost four wickets in the last five overs of the innings as Shoaib, Babar, Imad Wasim, and Sarfraz Ahmed were all caught out.

Imad gave Imran Tahir a simple catch while trying to get a boundary off Thisara Perera. Skipper Sarfraz got out on his first ball, also caught by Tahir.

Sarfraz won the toss today and opted to bat first. The pitch, which looks less dry today is likely to have more bounce. "It's a pitch where most teams won't mind batting second," predicted former Zimbabwe cricketer Pommie Mbangwa.

All three matches of Independence Cup will be broadcast by PTV Sports.