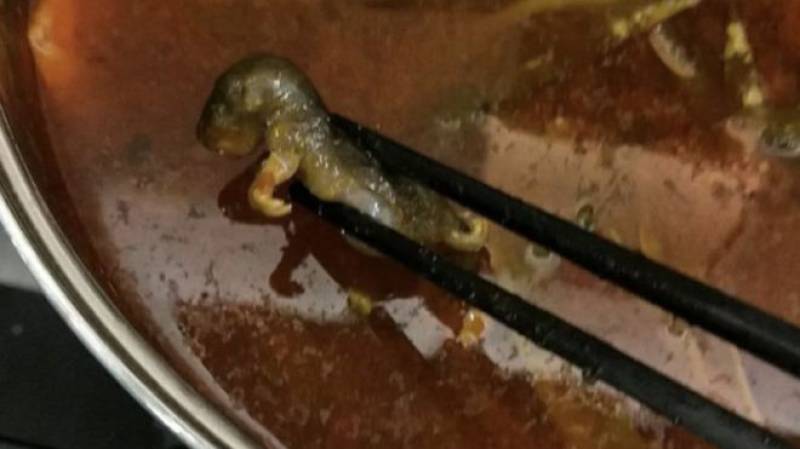 BEIJING - A popular Chinese restaurant chain has lost around $190 million in market value after a pregnant woman found a dead rat in her soup.

Xiabu Xiabu's stock has hit its lowest level, after photos of the dead rat being fished out of the broth with a pair of chopsticks quickly spread online.

The outlet in Shandong province has now been temporarily suspended, according to local news outlet Kankan News.

It had reportedly offered her 5,000 yuan (£559, $729) as compensation. However, the woman's husband declined the offer, as he wanted his wife to undergo a full body check-up before deciding on a compensation amount.

The pregnant woman who had been out for hotpot with her family on 6 September, also alleged that one of the staff had suggested her get an abortion if she was worried about the baby's health, and offered him 20,000 yuan for the procedure.

LIMA - A rodent was caught on camera in the Peruvian city of Huaraz lathering up and scrubbing itself down. The bizarre ...

Photos of the boiled rat quickly spread on Chinese social media site Weibo, where users reacted with anger and disgust.

The restaurant initially put out a statement on Saturday saying that it had "ruled out" the possibility that a lack of hygiene had caused the rat to end up in the hotpot, but later deleted it.

Authorities in Weifang city, the restaurant branch where the rat was found, said they would conduct investigations into Xiabu Xiabu's restaurant.

Hotpot is a common meal in China and across other parts of Asia. A simmering pot of hot soup is placed at a dining table and various vegetables and raw meats are then placed in the pot to cook.