Pakistani Men have a REAL bad problem of staring at 'OTHER' women, & women in general 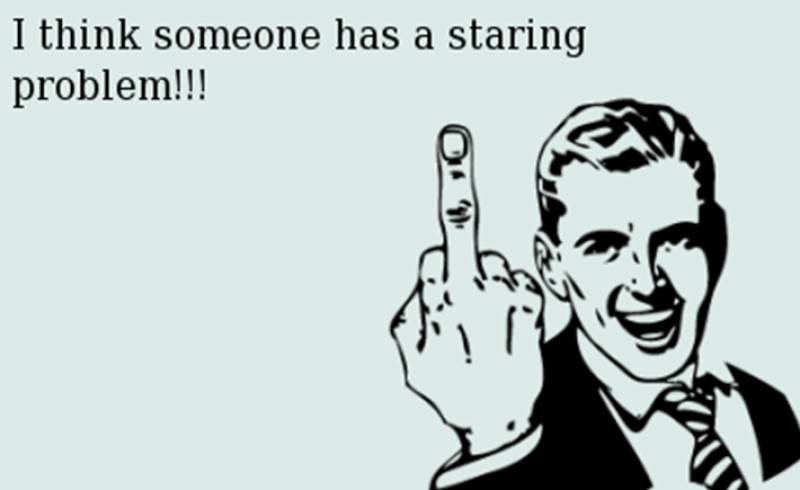 Why do Pakistani men stare SO MUCH?

I mean it's okay, once in a while. An exceptionally hot female walks into a room, you are allowed to give her a glance. However, ogling for hours and hours is not on, but what I've realized is that Pakistani men JUST DON'T GET IT.

Whether it's someone riding a bike or someone driving a Mercedes, if you're a woman who's wearing make-up and nice clothes, laughing with friends or driving alone, you are bound to get A LOT of male attention.

Most of the times-it sadly doesn't even matter what you look like--if you have the female form, you are going to be stared at, ALOT.

It is never-ending, and it makes you feel.......so yuck! No, we women don't want to be looked at by men from every nook and corner of the city.

It's like creeps staring at you, raping you with their ugly eyeballs.

What I don't understand is that these men already have wives and daughters even, and they have been born from a female, their mothers. They have grandmothers, and have seen a lot of different women around the while, by travelling or through television. However, their desires still seem to remain unfulfilled, and they ogle at you like there's no tomorrow.

Like, relax the hell out, Pakistani man. Looking won't give you what you desire.

Absolutely hate the filth that comes from within; and as a woman, having a sixth sense is one of the MANY natural instincts we are born with. You can tell if a person is staring at you from miles away, so someone who's almost throwing his face into your car's window while ogling at you, is surely making you realize what he's doing.

Don't even get me started at driving alone at night. It's a DOG FEST out there.

Literally, male of all ages (and SPECIES, even) are out to ogle at females who drive out late, alone by themselves or with a couple of female friends.

It doesn't matter what ever the hell you are seen doing: you're a FEMALE in PAKISTAN driving a CAR and you're feeling UNSAFE, because men will stare at you, no matter what.

We need to create public awareness campaigns that eye-shame men who ogle at women for hours, and especially those married, fat old baldies who ogle much more than the younger ones. STOP IT!

Pakistani men should start getting fined for their STARING PROBLEM, because that is the only way to prevent it.

My appeal to the (whichever) government that takes over: PLEASE make this country STARE-FREE, so we can safely enjoy our lives and being a woman doesn't feel much of a burden, than it already does.