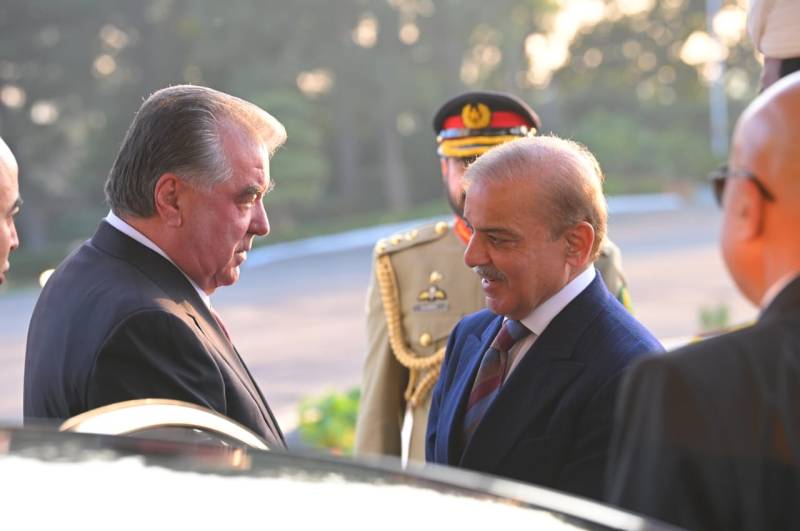 After the one on one meeting, both officials led delegation level talks where they also witnessed signing of memorandums of understanding (MoUs) for the promotion of cooperation in diverse fields.

Prior to the meeting, a guard of honor was presented to the visiting dignitary by a contingent of armed forces.

The Tajik president arrived in Islamabad on a two-day official visit earlier today. He was received by Commerce Minister Syed Naveed Qamar and other Pakistani officials at the airport.

Following the signing of the MoUs, the Tajik president and PM Shehbaz held joint press conference where former expressed his desire to develop energy, rail and road connectivity with Central Asia States. He said the connectivity would usher in a new dawn of prosperity and development in the region.

He said Pakistan had been the first country that established diplomatic ties with Tajikistan some 31 years back. Since then both countries had been enjoying excellent cordial and friendly relations, he said.

The premier further said Pakistan attached immense importance to its bilateral ties with Tajikistan as it was a gateway to the central Asian region. .

He informed that he held productive meeting with the visiting official to further strengthen the bilateral relations and promote trade, and investment.

He also welcomed the Tajik president and his delegation and said that the people of Pakistan were overwhelmed with joy and pleasure over their visit, state broadcaster reported.

Talking to media, Tajikistan president Emomali Rahmon said that his country attached high priority to its relations with Pakistan.

He said both countries had been making joint efforts to further promote the friendly ties and expressed the optimism that the MoUs signed between the two countries would give new impetus to these relations.

The two sides also expressed satisfaction over bilateral security cooperation and reaffirmed to battle it out the contemporary challenges jointly like extremism, terrorism and radicalism.