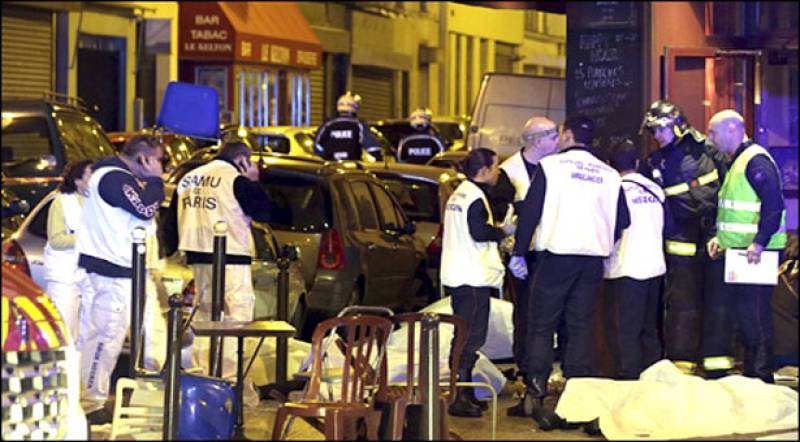 PARIS (Web Desk) -France has declared a national state of emergency and closed its borders following the killing of 130 people in a series of terror attacks inside Paris.

Most of the people are reported to have died at the Bataclan concert hall in central Paris where gunmen took many hostages.

Others died in a reported suicide blast near the Stade de France and gun attacks on city centre restaurants. 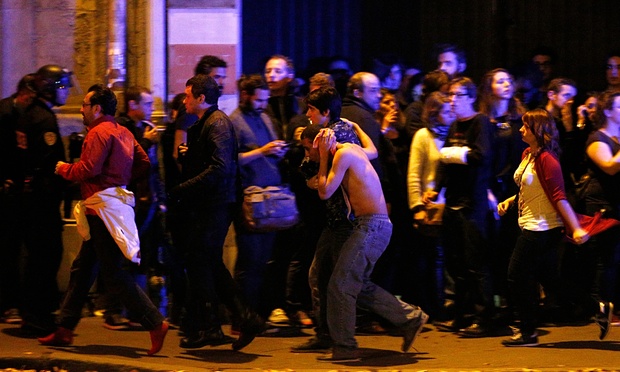 According to French authorities, the terrorists targeted seven places.

Paris residents have been asked to stay indoors and about 1,500 military personnel are being deployed across the city.

Julian Peace, a journalist for Europe 1, was inside the Bataclan in the 10th arrondissement, a popular and renowned concert venue, when the attack happened. He told France Inter that two to three people – not wearing face masks – opened fire on the crowd with automatic weapons, possibly, kalashnikovs.

He said the shootings lasted 10 to 15 minutes – long enough for the assailants to re-load their weapons two or three times.

Another witness, who was at the Bataclan with his mother, told France Inter that he heard the assailants screaming “Allahu Akbar” while shooting inside the crowd.

“It was carnage,” Marc Coupris, 57, told the Guardian, still shaking after being freed from being held hostage at the Bataclan, a popular concert venue.

“It looked like a battlefield, there was blood everywhere, there were bodies everywhere.

I was at the far side of the hall when shooting began. There seemed to be at least two gunmen. They shot from the balcony.” 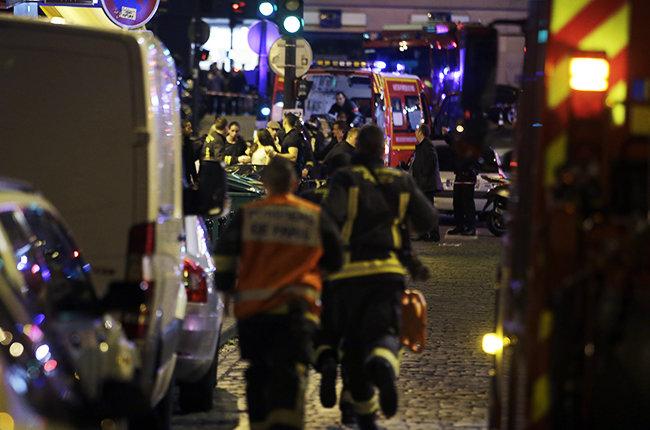 “Everyone scrabbled to the ground. I was on the ground with a man on top of me and another one beside me up against a wall.

"We just stayed still like that. At first we kept quiet. I don’t know how long we stayed like that, it seemed like an eternity. I saw my final hour unfurl before me, I thought this was the end. I thought I’m finished, I’m finished.

"I was terrified. We must all have thought the same.

"Eventually, when a few gendarmes came in slowly we began to look up and there was blood absolutely everywhere. The police told us to run.” 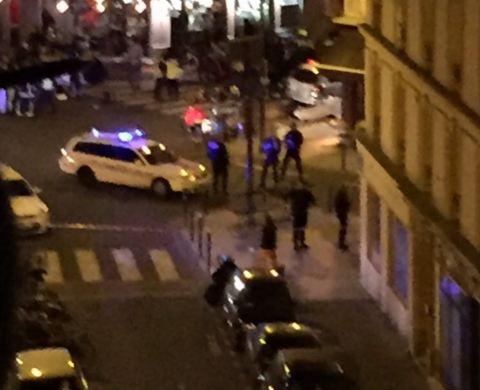 Coupris, a legal worker, had come from Brittany with 15 friends to see the US band Eagles of Death Metal.

Jérome Boucer, shivering in the cold night wearing a white shirt splattered with the blood of the victims and wounded, told the Guardian: “The concert had started. I was in the audience and I heard what sounded like a firecracker.

It was loud but the gig was very loud and I thought it was something that was part of the show. I think lots of people did too.

Then they started firing. I saw what I thought was at least two people, then I fled. The exits were clearly marked and I just ran. There were wounded, there was a lot of blood. Blood everywhere.” 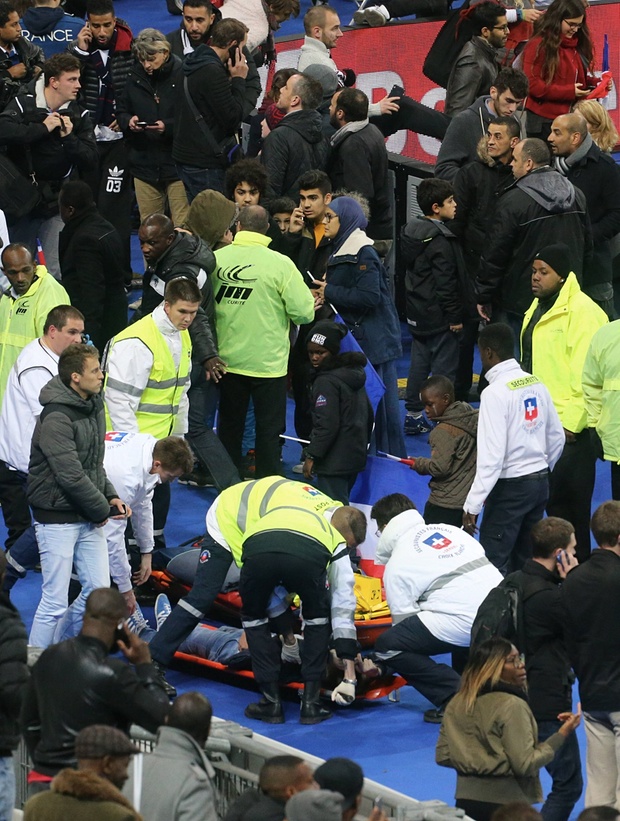 “It felt like a film,” added a woman in tears, who was part of Boucer’s group.

“It was horrible, there were so many corpses, I just can’t talk about it,” said a bearded man in a death metal T-shirt as he ran down the street from the Bataclan in shock.

A woman in her twenties 20s in a fur-collared coat had been drinking in a bar close by when people fleeing the initial shooting at the Bataclan ran into the bar.

“They were panicked, wounded, screaming, blood was running all over them, people were having panic attacks, it was horrific.”

The bar locked down but after police allowed it to be open again, she began running down the street towards the 3rd arrondissement to get away as fast as possible.

As she and her friends ran, a young man with her in an overcoat and scarf said: “Crazy people did this. They were crazy, religious, crazy.”

“Some people in the bar heard shots and the shutters were pulled down.

The first thing I thought of was the Charlie Hebdo attacks and terrorists. People were really afraid.”

Frédéric Nowak, 49, who works in coffee-machine distribution, was standing in his blood-soaked Boston Celtics T-shirt and lifted it up to show blood-caked surface wounds across his chest.

He had driven from Seine-et-Marne outside Paris to see the gig with his 21-year-old son and brother-in-law.

“The gig had been going for around 30 minutes. I heard the shots but I thought it was a noise that was linked to the show.

I saw two people with kalashnikovs. One I saw from behind, the other I saw from the front and he wasn’t wearing a mask. They were just stood firing at random into the crowd,” he told the Guardian.

“It was terrifying. There was lots of screaming, lots of panic, lots of blood. People threw themselves to the ground but then they just started firing at random at the people on the ground. 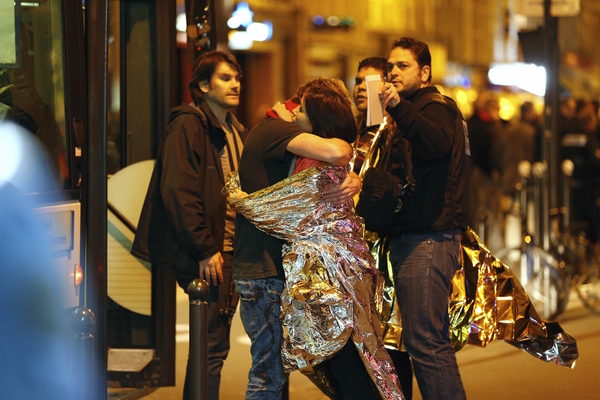 That was when I thought we had to get out. We were around five metres from the stage, so we hid behind a speaker, then we ran backstage to the dressing rooms.

We could still hear rounds and rounds of gunfire as we ran up flights of stairs and someone forced a trap door open onto the roof.

A man from a neighbouring building took us into his apartment.

There were 40 of us in the flat. We heard the shots. Later we heard the load bang of the police assault. I was separated from my son who was in a different apartment and I now just want to find him.”