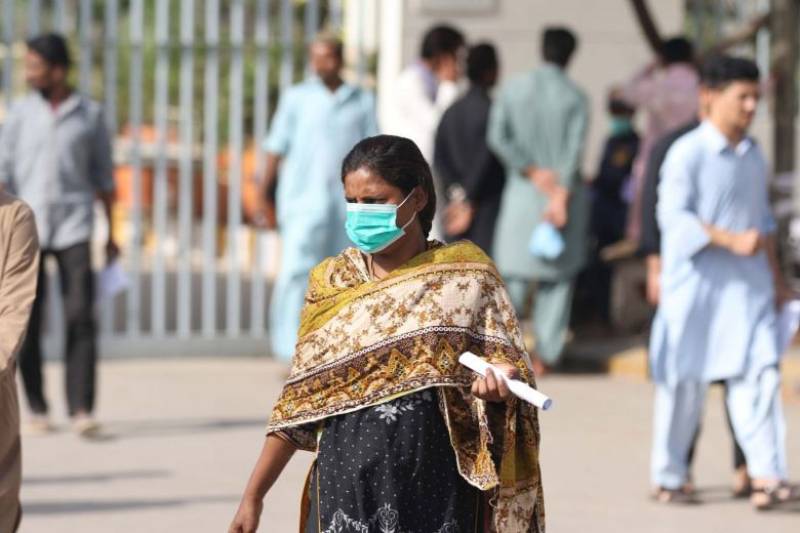 ISLAMABAD – The total number of active cases of coronavirus have reached to 8782 in Pakistan after 615 more people tested positive for COVID-19 in the past 24 hours.

According to the latest statistics, the contagion claimed lives of fourteen more people during the last twenty-four hours.

A total of 28,916 tests were conducted over the last twenty-four hours.

As many as 305,080 patients have so far recovered from the virus in the South Asian country.

Meanwhile, the National Command and Operation Center (NCOC) on Tuesday has issued guidelines related to all types of public gatherings excluding marriages and sports activities, in view of prevailing COVID-19 situation and its potential to spread.

The guidelines were prepared with input from provinces after inclusive deliberations and recommendations.

As per the guidelines, public gathering meant where people were assembled on any given space; indoor or outdoor, for some purpose such as cultural events, religious gatherings, sports events, entertainment or cultural events, parties, political gatherings or other similar events.

The guidelines had categorically stated that public gatherings should be discouraged in view of their potential to become super spreaders preferably no public gathering be held except those related to economic activity.

Moreover, if holding of public gatherings was unavoidable, then these should be held in well defined venues which facilitate enforcement of following SOPs as for indoor events maximum participation to be 500 persons or 50 percent of capacity whichever was less.

Duration of the event or activity should not exceed 3 hours all persons would be seated no standing participation. Inter chair distance to be minimum 3 feet or more.

In case of Outdoor Events, the following safety measures and SOPs should be ensured as Entry/Exit Control, Density Control, Social Distancing.

Furthermore, all persons would be seated no standing participation and inter chair distance to be minimum 3 feet or more.

However, duration of the event or activity should not exceed 3 hours, rallies, walks or gatherings on the Roads, Streets and other ill-defined places should be avoided.

Organizers to be responsible for ensuring compliance of SOPs particularly masks, social distancing and provision of COVID Safety Kit (a mask & a mini hand sanitizer) to each person "No public gatherings to be held in cities where positivity ratio is consistently higher and is within 2nd Slab (6-9 percent) or above as laid down in instructions 'Quantified Triggers & Corresponding NPIs' which are already issued." The guidelines for participants noted that children and elderly should be discouraged to participate, people with COVID or respiratory illness related symptoms must not be allowed to attend, individuals with comorbidities such as chronic illnesses including Diabetes, High Blood Pressure, Heart Disease etc should not be allowed to participate.

It added that no attendance without mask, no handshake or hugging was allowed.

For Refreshments and Meals arrangement at public gatherings, it was provided that no meals or light refreshment should be allowed in any type of gathering.

Meanwhile, drinking water facilities should be dispersed at multiple locations to avoid crowding, preferably water bottles be provided to the participants, otherwise disposable glasses should be used.

In order to hold mass public awareness, anti COVID awareness board or banners at the Venues to be displayed by organizers whereas periodic announcements for masks, social distance and other SOPs through Sound System during conduct of the event to be made by the organizers.