"Your diploma is fake": Pressure mounts on Turkey's Erdogan who cannot quell questions about degree 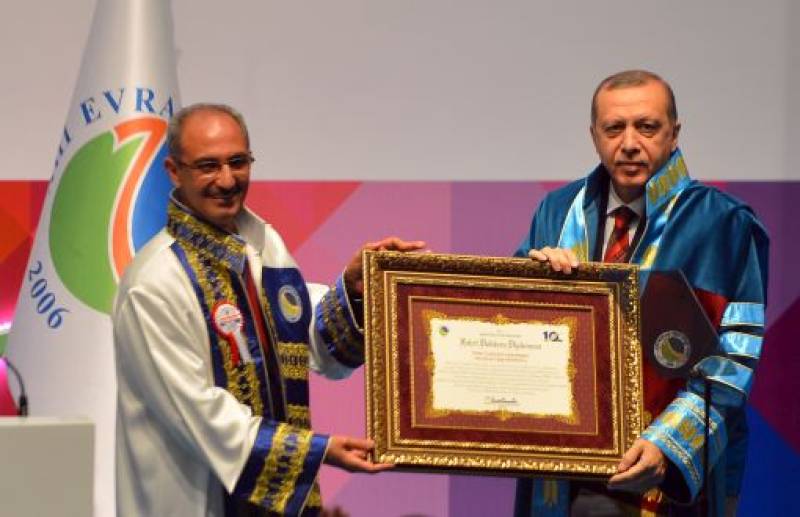 ANKARA (Web Desk) -   Turkish President Recep Tayyip Erdogan has been honored with the 44th honorary doctorate of his political career. However, rather than bolster his academic credentials, the award has re-sparked  an debate regarding his academic career, spurred predominantly by political rivals.

Erdogan's rivals claim that the leader does not possess a university degree, making him ineligible for presidency under Turkish law. Turkey’s association of university professors UNIVDER vindicates this as well.

Turkish president has, so far, only been able to awkwardlu deal with the accusations hurled at him.

A former prosecutor Omar Faruk Eminagaoglu has formally lodged a complaint with Ankara prosecutors and Turkey’s election council to de-seat Erdogan citing the murky status of his degree.

Meanwhile, Erdogan's rivals have gained much political mileage by poking fun at the leader's 44 honorary degrees. They have inspired tweeple to trend Twitter hashtags #diplomasidasahte (your diploma is also false) and #yadiplomayaistifa (either the diploma or resignation).

A deputy from the opposition Republican People’s Party (CHP), sarcastically proposed submitting a bill to parliament to abolish the requirement for the president to have a university education and save Turkey further embarrassment.

Erdogan who built his political stature on the story of being the pious boy from a poor background is now in hot waters.

Erdogan's biography suggests that he received his university degree in 1981 after four years of study at the faculty of economic and administrative sciences of the Marmara University in Istanbul. The university — whose rector is a close ally of Erdogan — rejected the claims that the degree was falsified as “unfair” and “baseless”.

The controversy came to light as the Turkish head of state fired accused opposition academics at universities of being traitors for not supporting the military’s offensive against Kurdish militants.

Presidential spokesman Ibrahim Kalin, retaliating to the suspicions, said angrily.“What do you want, that we find 10 million copies of these degrees and send them to the whole world?”.

President Erdogan himself refuted the allegations and dismissed it as a tired ploy by his rivals. “Despite all the explanations and declarations that have been made on this subject, some people want to revive the debate,” Erdogan said last week.