COVID-19: Chaos at US airports after new health screenings to control coronavirus 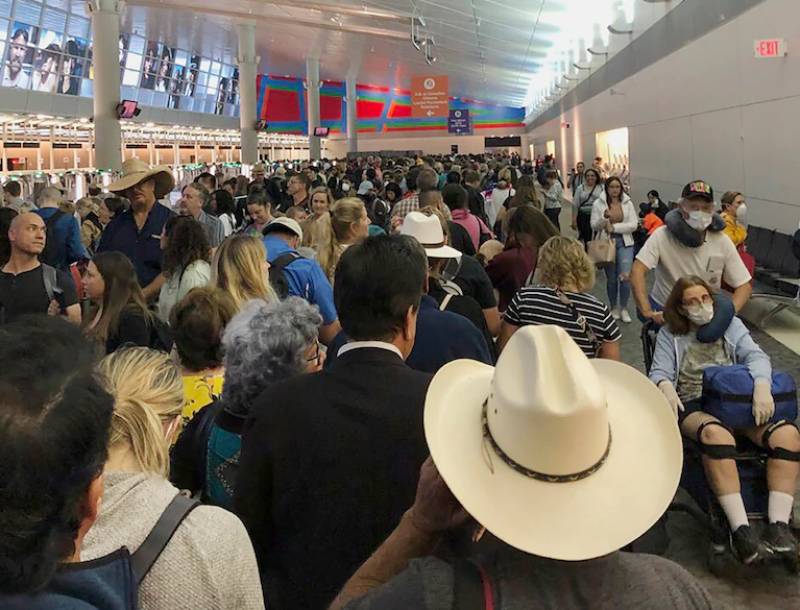 NEW YORK – Airports across the United States were thrown into chaos Saturday as workers tried to enforce the Trump administration’s new health screenings for people returning from Europe, as part of efforts to stop the spread of the coronavirus, according to American media reports.

Travelers faced hours of delays, long lines and jam-packed hallways as workers questioned them about their medical history and checked them for symptoms.

Passengers on flights from 26 countries in Europe are being routed through 13 U.S. airports, where workers check their medical histories, examine them for symptoms and instruct them to self-quarantine for 14 days.

But just hours after taking effect, the measures designed to prevent new infections in the United States had created the exact conditions that facilitate the spread of the highly contagious virus, with throngs of people standing shoulder-to-shoulder in hours-long bottlenecks, according to experts.

As confusion and anxiety spread, the debacle threatened to deepen the coronavirus crisis for the Trump administration, which has struggled to mount a coherent response to the pandemic or convey a consistent message to the public about what the federal government is doing to mitigate the outbreak.

The scenes at the airports — captured in an outpouring of angry social media posts — bore a striking resemblance to the botched implementation in early 2017 of President Donald Trump’s travel ban targeting citizens from predominantly Muslim countries, which triggered chaos and protests at United States airports as travelers from the Middle East were detained or sent home with almost no warning.

Saturday’s confusion came as concern spread about the coronavirus pandemic, which has now been identified in more than 2,700 people in the United States and has prompted Trump to declare a national emergency.

Earlier, Spain announced a nationwide lockdown as France moved to close all nonessential businesses — including cafes, restaurants and movie theaters — in the latest testament to the coronavirus pandemic’s profound impact on daily life around the globe.

Upheaval continued in the United States, as well, on Saturday as Georgia followed Louisiana’s lead in delaying its presidential primary and three states reported their first coronavirus-related deaths.

The United States will be banning travel from the United Kingdom and Ireland beginning Monday at midnight, officials said.

“At this time, we are working quickly with our partners to operationalize a plan which will outline where these travelers will be routed and what the screening process will be,” Marcus Hubbard, a spokesman for the Centers for Disease Control and Prevention, was quoted as saying.

A surge in coronavirus patients is threatening to swamp U.S. hospitals, as Oregon, Virginia, Louisiana and New York all reported their first coronavirus-related deaths on Saturday.

Ten U.S. service members have tested positive for the novel coronavirus, along with one Defence Department civilian and two contractors, military officials said.