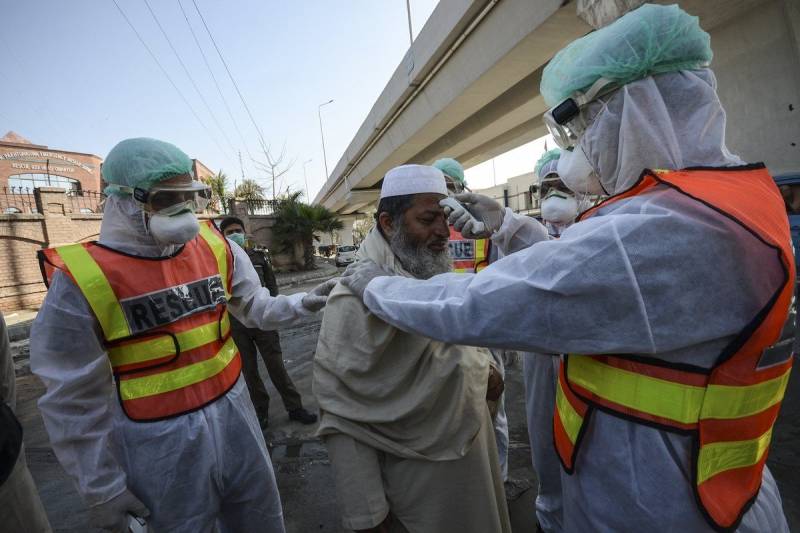 ISLAMABAD – Pakistani government on Sunday announced that section 144 has been imposed in the country as five more people were infected from COVID-19, a novel coronavirus, bringing the total tally from 34 on Satruday to 52 on Sunday.

There are now 52 confirmed cases, of which effective contact tracing is being carried out. We’ve increased our diagnostic capacity, and are now able to carry out #coronavirus test in 13 labs across the country <257>

About 13 people from Sukkur in Sindh province have tested positive for the novel coronavirus after returning from Iran, spokesperson for the Sindh government Barrister Murtaza Wahab said. "These people were purportedly kept in quarantine at the border," he tweeted.

This is the highest number of cases reported in Pakistan in one day.

LAHORE - First case of coronavirus was reported in Lahore on late Saturday, taking the toll to 31 across the country, ...

The 54-year-old patient was admitted to Mayo Hospital on Saturday night after developing symptoms, days after he returned from the UK on March 10.

Early Sunday, the authorities reported five other new cases bringing the total number of cases reported in one day to 18. Pakistan Institute of Medical Sciences (PIMS) confirmed one case in Islamabad while the Sindh Health Department reported four more cases in Karachi. At least five cases were also reported on Saturday across the country.

The latest patient reported in Islamabad is the husband of an infected woman who recently travelled to Pakistan from the United States and tested positive on Saturday. She is also in critical condition, receiving treatment at the isolation ward in the Pakistan Institute of Medical Sciences (PIMS).

According to reports, one out of the four cases reported on Sunday is locally transmitted while the remaining three returned from Saudi Arabia a few days ago.

Sindh province has been the worst hit with 21 out of total 38 cases until Sunday afternoon. At least two patients have been discharged from the hospital after full recovery.

While Prime Minister Imran Khan has decided to supervise the campaign personally after chairing the National Security Committee (NSC), also attended by top military brass, the National Disaster Management Authority (NDMA) has been tasked to coordinate with provincial governments and lead the fight against to contain the virus.

Pakistan is keeping its borders with Iran and Afghanistan closed, and international flight operations shut on all airports except Lahore, Karachi and Islamabad which are equipped with scanners to detect coronavirus suspects.,

All educational institutions have been closed across the country until April 5.

The annual National Day military parade scheduled for March 23, where thousands of guests are invited, has also been cancelled, according to the military spokesman.

Also, Pakistan Rangers Sindh has postponed the recruitment process across the country due to follow the instructions issued by government to prevent coronavirus pandemic. According to a spokesman of Rangers, new schedule for the recruitment will be announced later.

The Punjab government on Sunday decided to impose Section 144 of the Code of Criminal Procedure (CrPC), banning public gatherings in wake of a surge in novel coronavirus cases across the country.

Similarly, Home and Tribal Affairs Department of the Government of Balochistan also issued the notification, banning the “gathering of 10 or more than 10 persons with immediate effect for a period of one month.”

According to the notification, there a ban on sit-ins and procession, rallies at public places, markets and hotels/restaurants and on wedding parties, sports gathering, cinemas, educational gatherings, conferences and seminars.

All educational institutions in the southwestern province will remain closed and the teaching staff will also not be permitted to enter schools, colleges and universities.

Azad Jammu and Kashmir Government also announced on Saturday to impose section 144 Cr. PC as precautionary measure to help stop the spread of coronavirus. The decision was taken at a high-level meeting of State Coordination Committee presided over by Prime Minister Raja Farooq Haider Khan.

Speaking on the occasion, Prime Minister Raja Farooq Haider Khan directed the authorities concerned to keep close liaison with all relevant segments of the society including Ulema to aware masses about the corona pandemic.

He also directed to use local newspapers, polio teams, teachers and district administration to educate the public about the epidemic effectively.

State Minister of Health Zafar Mirza said that all of Pakistan’s cases were imported by its nationals returning from countries including Iran, Syria, China and the United Kingdom.

Pakistan shares a roughly 900-kilometer border with Iran, where officials have confirmed that COVID-19 has killed more than 720 people and that nearly 14,000 others have been infected.

Talking to PTV, Dr. Zafar urged the masses not to get panic and feel scared of the disease and adopt safety measures. He further informed that federal government has initiated different special programs to speed up awareness campaign about the disease. "People must adopt hygiene and cleanliness, the best way to stay safe from Coronavirus is to prevent it by following the instructions given by public health department," he said.

So far, nearly 6,100 people globally have died from COVID-19, as the illness is officially known, while more than 162,000 infections have been confirmed in dozens of countries, according to the World Health Organization (WHO).