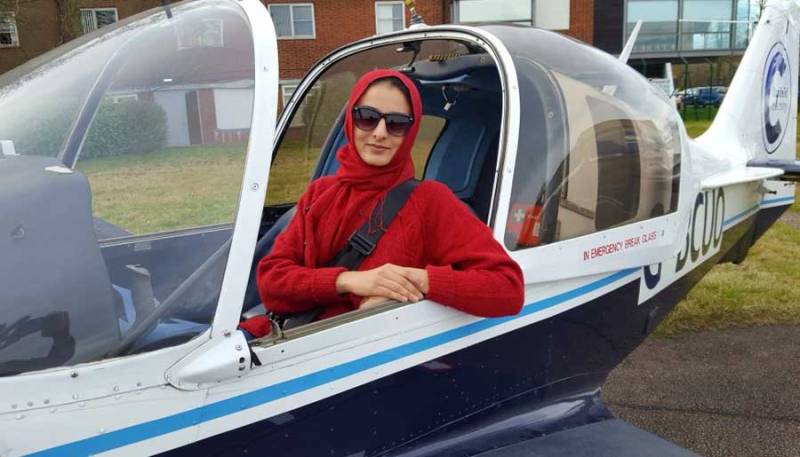 She has launched a company called “Aero Engine Craft” to make environment friendly airplane engines, with her father, Masood Latif Qureshi who is also a scientist and a physicist.

The engine which she has developed has an idiosyncratic pressure-based condensation system which will help in cooling the water vapours in the airplane exhaust. The water will be on the airplane and can be released as rain if required.

Qureshi has a PhD in Aerospace Engineering from Cranfield University in UK. After graduating as a Mechanical Engineer from Pakistan, Sarah gained extensive experience of working in the local automotive and engineering industry.

Sarah holds a Private Pilot License (PPL) with 70 hours of Flying Experience. She has also learned acrobatic flying and several flight maneuvers while at Cranfield.

Qureshi has been working on the project since 2018 to eliminate the negative impact of commercial air carriers on the stratosphere that contributes to global warming.

The US Embassy in Pakistan has also appreciated her efforts.

An environmentalist at heart, Qureshi turned her academic research at Cranfield University, UK, into a save-the-planet endeavor and embarked on a mission to build the world’s first pollution-free jet engine.

The world aviation industry, ignored to develop the technology and focused more on extracting monetary value by building fuel-efficient engines, she said.

Taking a swing at Elon Musk’s trip to Mars program, the scientist says that “unless you have a confirmed ticket” to the red planet, “which does not have a livable atmosphere,” Earth is the best bet and must be saved.

ISLAMABAD - Federal Minister for Science and Technology Fawad Chaudhry has urged world's one of the leading electric ...