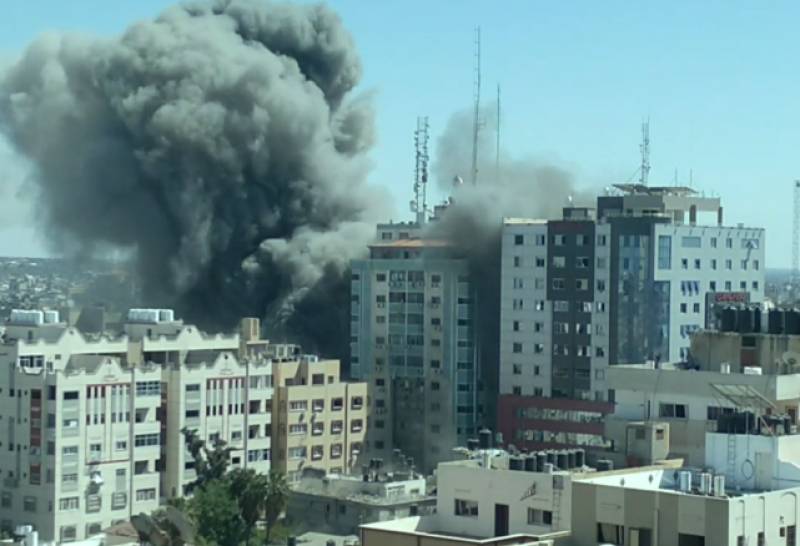 As Israeli aggression continues to intensify against the people of Palestine, another high-rise building in Gaza City that housed offices of The Associated Press, Al Jazeera, and other media outlets was razed to the ground in a targeted attack.

The attack is being termed as a step to silence reporting from the territory facing heavy bombardment by Israeli fighter planes for six days.

The strike on the Al Jala building, the second tallest skyscraper in the city, came nearly an hour after the Israeli military ordered people to evacuate the building, which was demolished with an attack of four missiles in a few seconds.

#IsraelTerrorism and war crimes continue in #Gaza. #Israeli airstrikes destroy Al Jala Tower which had offices of several international media outlets including #AlJazeera, AP and more. And they call it an act of self-defense.#Gaza_Under_Attack #FreePalaestine #PalestineBleeding pic.twitter.com/qdhqzCKC9r

The latest attack came hours after another Israeli air raid targeted a refugee camp in Gaza City killing at least 10 Palestinians from an extended family, including children, despite the international community’s calls for stopping the military attacks.

At least 137 Palestinians, including 36 minors, have been killed as Israeli forces continued to bombard Gaza with air raids and artillery shells on Saturday.

According to reports of international media, the casualties are expected to soar, as another spell of Israeli airstrikes hit the Shati refugee camp in Gaza killing more women and children.

As for now, thousands of Palestinian families have shifted to United Nations-run schools in northern Gaza to escape the massacre. According to a UN official, nearly 10,000 Palestinians have left their homes in Palestine amid the massacre by Israeli forces.

Israel PM Benjamin Netanyahu pledged to kill Palestinians ‘as needed to restore calm in the state of Israel’. Despite international calls to stop ethnic cleansing, Israel's air force pounded several sites in the strip overnight, while Hamas continued to retaliate the brutal attacks from the Jewish state.

Meanwhile, the United Nations said the Security Council would meet on Sunday to address the conflict as the world body's Secretary-General called for ‘an immediate de-escalation and cessation of hostilities. Too many innocent civilians have already died’.