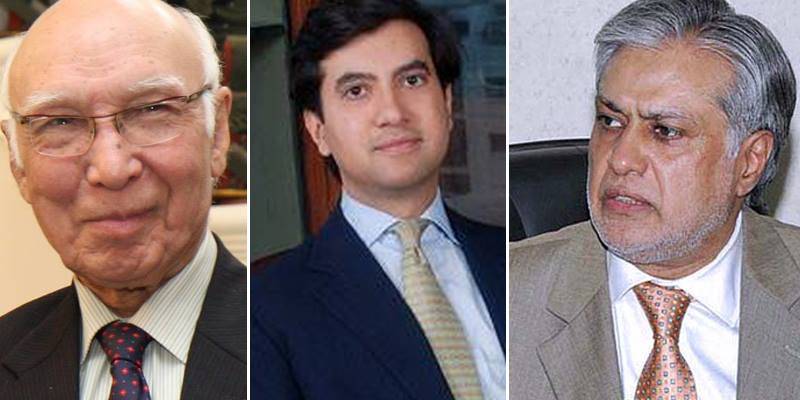 With the incumbent finance minister Senator Muhammad Ishaq Dar having relegated himself to London for ‘medical reasons’ – ostensibly a cover for the reasons that everyone in Pakistan is well aware of – the voices calling for having his replacement run the all-too-important finance ministry are gaining currency and strength, with every passing day.

Prime Minister Shahid Khaqan Abbasi finds himself in a bind. Yes, in a defining bind because he is not the one who will decide the fate of Mr. Dar. The fate of Mr. Dar, well-known as it is, is to be decided by Nawaz Sharif himself.

Abbasi has replaced Dar with Ahsan Iqbal in the Council of Common Interest (CII), but that too would not have been possible without a nod of approval from Sharif. Let us not forget that Abbasi had called upon Sharif in Jati Umra just a day before the CII meeting in Islamabad on Monday, November 13, even at a time when Mr. Sharif was expected to reach Islamabad on Tuesday, November 14, in relation to his appearance in the accountability court the next day.

We are not contemplating here that the Abbasi-Sharif meeting revolved around this single point, but there is little doubt that the CII meeting, as well as the composition of this important constitutional body in the absence of Mr. Dar, was an important agenda point that the leadership of the ruling party had to make some decision about.

Senator Dar, during just over four years period with Nawaz Sharif as prime minister, was all-in-all of the four ministries/divisions namely finance, economic affairs, revenue, and statistics. Haroon Akhtar was serving as special assistant to the prime minister on revenue, with the status of minister of state, meaning that he too was working under Dar. After Abbasi’s elevation to the post of prime minister, the cabinet reshuffle saw appointment a new federal minister of statistics – Kamran Michael, reducing the number of divisions under Dar from four to three, while Abbasi took some time in the reappointment of Haroon Akhtar, till late August 2017.

Dar, however, continues to run the three divisions – finance, economic affairs and revenue, as of now.

Let us not forget that State Bank of Pakistan, in its latest annual report for 2016-17, has noted that “maintaining this momentum [of growth and positive developments in the economy] would largely depend on addressing emerging challenges in the external and fiscal accounts.”

Instead of paying heed to this caution, the finance ministry under Dar is continuing with the practice of taking more loans, with a heavy share of costly commercial loans. Commercial loans over $700 million have already been arranged within four months of the fiscal year, while the target for the whole year was $1 billion. How can the external sector be stabilized with the continuity of this approach? This is what happens when there is no effective political attention to such important matters, and the things are left to the ‘easily manageable’ ways out.

The news from certain other sectors of the economy is also not very encouraging, demanding the further attention of real boss.

Now the question is what are the options at hand for Mr. Abbasi, and the ruling Pakistan Muslim League-Nawaz (PML-N), to deal with this scenario?

Some of the experts are bringing up the name of Sartaj Aziz – who according to some, with his experience and expertise – is ‘forced to underperform’ in his present post as deputy chairman of the Planning Commission. But we should not forget that Sartaj, in his mid-80s, was until very recently being criticized vigorously for not being a fitting choice for an advisor to prime minister on foreign affairs, before Abbasi replaced him with Khawaja Asif.

The other choice is to have ‘special assistants’ with designated portfolios of finance and economic affairs – with status as the minister of state – just like the case was with Haroon Akhtar, dealing with revenue – all working under Dar as the federal minister. In this case, Ali Jahangir Siddiqui may have a more prominent role to play

Looking from a political angle, the resignation of Dar and appointment of a new finance minister would be a hard pill for Abbasi and PML-N to swallow at this point in time. Yet, the need for a full-time and dedicated finance minister can hardly be overemphasized in the prevailing circumstances.

We are at a point in time where the preparation for Budget Strategy Paper for 2018-19 should be getting the due attention of the rulers, especially economic managers, from a few weeks from now. Let us hope that the ruling party and the government – though too caught up in litigation and political pressures of all sorts – would make it a priority and come up with an acceptable solution to this conundrum. The sooner, the better.