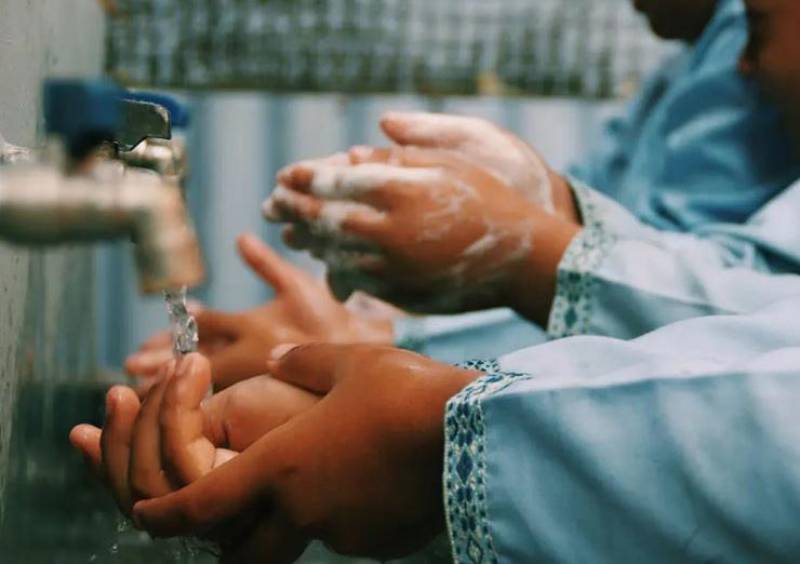 ISLAMABAD – On Global Handwashing Day, the Ministry of Climate Change, GIZ, UNICEF, Unilever and WaterAid collaborate to sensitise the Pakistani population on the importance of handwashing with soap to prevent infectious diseases.

Officials from MOCC, UNICEF, GIZ, WaterAid, and Unilever organized “National Dialogue on Behaviour Change & Hand Hygiene for All in Pakistan.”

The event aimed to raise awareness and commitment to promote handwashing as an effective and affordable way to prevent diseases and save lives. It started with hand washing demonstration presented to the participants followed by panel discussion on the topic ‘Our Future is at Hand – Let’s Move Forward Together’ comprised of experts from UNICEF Pakistan, GIZ, WaterAid Pakistan, Ministry of Health and Unilever.

The event further included the launch of the National WASH Behavior Change Communication (BCC) strategy, and the dissemination of the Hand Hygiene for All roadmap to provinces.

Ms. Naz Baloch, Parliamentary Secretary on Climate Change speaking at the event urged sector partners to play a collective role and educate the masses about adopting and developing the habit of handwashing. “Government is committed to promote and implement the Hand Hygiene for All roadmap and will always support such initiatives in future. But now is the time when the support of WASH Sector partners is critically needed to”, she further added.

Mr Ziggy Kugedera, WASH Specialist from UNICEF indicated that according to the 2020JMP report, over 40 million people in Pakistan lack access to handwashing facilities with water and soap and disparities exist between the poor and the rich. At least 90% of those in urban areas have access to basic handwashing stations while 74% have in rural areas. The situation has been exacerbated by the floods which washed away WASH facilities. “Already, diarrhea infections especially among children have been reported in flood-affected areas hence handwashing becomes more important to save lives. This is everyone's responsibility, including government, private sector, men, and women including children” he remarked. UNICEF re-iterates its commitment to support the government of Pakistan in rolling out the Hand Hygiene for All roadmap to achieve universal handwashing by 2030.

Arif Jabbar Khan, Country Director - of WaterAid Pakistan discussed the role of Behaviour Change Communication and emphasized that “understanding the triggers of unhygienic behaviors and the bottlenecks that prevent marginalized communities from practicing hygienic behaviors are central to achieving Hand Hygiene for All”. “We also need to work with influencers from different fields who can model behavior change and help with achieving our common goals”, Mr. Khan added.